Paul Smith is king of the tennis courts 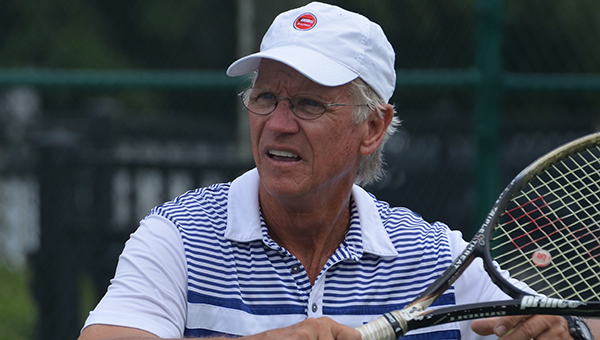 Drive by any tennis court in the Brewton area and one is bound to find Paul Smith.
Smith, 66, started playing tennis while he was at Samford University on a football scholarship. A former tennis coach at TRM, Smith can now be found giving lessons to young and old tennis athletes as well as playing the game he has loved for many years.
Smith first picked up a racket as a way to fill downtime between football seasons at Samford. Since then his love of the sport has followed him throughout the years.
“I played football at Samford and it just started in the off-season with nothing going on,” Smith said. “I love the game. My wife Janice and I have moved around a good bit, and everywhere we moved there has been opportunity to play tennis. I have always been able to find that person to play with and do things and it kind of just grew from there.”
Smith coached tennis at TRM for 12 years before retiring in June of 2013. But, he still didn’t lay down his racquet for retirement. Instead he created a tennis business on the side as he teaches young and old the game he loves.
“The teaching business kind of came in conjunction as I was coaching tennis,” Smith said. “I have probably been doing lessons since Morgan Manning was in the sixth grade. She was my first student, and she was a junior this past school year. So I guess I started in 2009. That is when it really got going then. She was my very first student.”
Smith said the business started one summer as a Babe Ruth baseball was going on.
“I had been out on the court playing with somebody, and I was walking back to put up some tennis balls and Morgan came out of the stands and asked if I would be interested in teaching tennis,” Smith said. “It started there and has grown into an empire. The business is good. I have about 40 students. I do camps in Jay, Fla., Excel and for the third year, I am doing a six-week camp in Andalusia. We have plans to try and do a summer tournament here and a 10U camp. The USTA is big in 10U camps and I have several that fall into that age category.”
Approximately three years ago, Smith became United States Professional Tennis Association certified and that is the professional organization of the USTA.
“I learned a lot,” he said. “A lot of information comes through that organization. I had a lot of videos and written information, clinics and conventions. I am learning new things all of the time.”
Smith says he just loves the competition of tennis and says one can get out and just play with someone and work on things in the sport at any time they want.
“I can get out here and just serve against a wall,” Smith said. “I just love the competition.
After college football, I really couldn’t find those guys that could keep playing, but with tennis you could,” he said. “It is a game for life. I have students that I taught in high school that are now in college and they are staying in touch with the game. That is all I wanted them to do is to just stay in touch with the game.”
Locally, Smith said he plays with Jimmy McCracken and Brian Garrett and he even does some tournaments.
“I just finished one at Rosemary Beach a couple of weeks ago,” he said. “Teaching tennis is great. I don’t have to have any lesson plans or pencils, I just can get out and teach tennis.”
While he is doing his clinics and just playing for fun, Smith estimates he is generally on the court from 3:30 to 7 p.m. every day and is also out on the courts on Saturday mornings and Sunday afternoons.
“It is a great game,” Smith said. “If you have got away from it, get back in it. If you have not tried it, just try it. It is a whole lot less expensive than golf. All you need is a racket and a tube of tennis balls and you are good to go.”