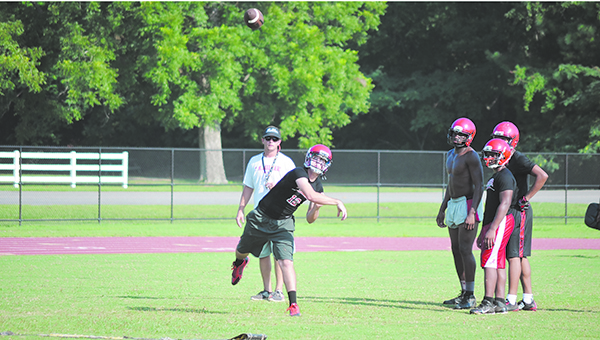 Friday night football may still be more than a month away, but fans of the game will get a taste of the action Friday at T.R. Miller as several high school football teams from across the state will descend to Brewton for Lower Alabama (LA) Air Raid Challenge.
TRM head coach Jamie Riggs said Friday’s plans are just to have a little fun.
“It helps out our offensive skill people and helps out our defense,” Riggs said. “It lets our defensive units to be able to cover spread offenses. It is nice to have a little good time and have some fun with it.”
TRM assistant coach Mikel Riggs, who is one of many spearheading the event, said he has 10 teams planning to play in the fundraiser..
Confirmed teams include, along with T.R. Miller, Bayside Academy, Luverne, Mobile Christian, Montgomery Catholic, Pace (Fla.), St. Luke’s, Straughn, Thomasville, and possibly UMS-Wright.
Riggs is gearing the event towards the smaller schools in Alabama, he said.
“Mainly the 1A through 4A teams,” Riggs said. “We have some schools coming from Florida and some other ones from the state. We have folks coming from Mobile, Pace, Fla., the Wiregrass, up to Montgomery.”
Play will consist of two pools of five teams with a guarantee of four games per team in each pool. Teams will be seeded by overall record from pool play and the championship tournament will be single elimination. Each team will be guaranteed a minimum of five games with two certified AHSAA officials on each field. Games will be a total of 25 minutes, and the clock will run continuous for the first 24 minutes and stop according to the rules during the final minute. One-hand touch rules will apply in the game.
Play will be held on two sites—TRM’s practice field and Brewton Municipal Stadium. Games are set to begin at 9 a.m.
“We will have pool playing going on in the morning,” Riggs said. “The single elimination will be after lunch.”
While certified AHSAA officials will be on each field, Riggs said they will also have a trainer at every field.
“One of our sponsors is bringing one, if not two, orthopedic surgeons down,” Riggs said. “We will have an orthopedic doctor on-site, just in case something happens, they are there.”
Entry fee for teams playing is $400. There is no fan entry fee.
“If you show up, you watch,” Riggs said. “We are not doing any concessions. We will have Main Event’s wings here. They will be selling wings.”
Scott McKinney with his sports radio show “The Ticket” in Destin, Fla., will also be in Brewton the day of the event as he will do his morning show from Peach Chevrolet and will do a remote throughout the day interviewing different people, sponsors, athletes, coaches.
Riggs said Dale Ash with Pepsi in Atmore will be supplying the Gatorade along with other local sponsors.
“These kids will not be thirsty,” Riggs said. “There will be cold Gatorade at all the sites and they can drink as much Gatorade as they want too.
“We are also going to feed the kids lunch. Frank Nalty with Nalty’s Seasonings will handle all the burgers.
For more information, visit laairraidchallenge.com.
“We are looking at growing it bigger next year depending on how it goes this year,” Riggs said. “It should be a good event.”

WANT TO GO?
The T.R. Miller Tigers will be hosting a 7-on-7 tournament Friday in Brewton.
Confirmed teams that will be coming, along with TRM, will be Bayside Academy Luverne, Mobile Christian, Montgomery Catholic, Pace (Fla.), St. Luke’s, Straughn, Thomasville and possibly UMS-WRight.
Play will begin at 9 a.m.
Play will consist of two pools of five teams. Teams will be seeded by overall record from pool play and the championship tournament will be single elimination.
Games will be 25 minutes with the clock running continuously for the first 24 minutes. The clock will stop according to the rules in the last minute.
One-hand touch rules apply. Games will be played at the TRM practice field and Brewton Municipal Stadium.

Paul Smith is king of the tennis courts