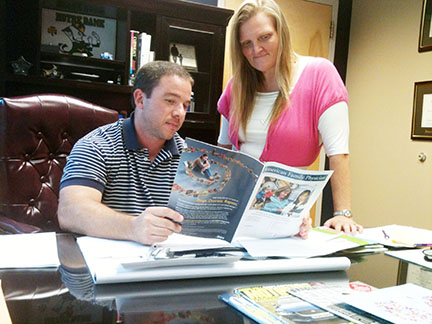 There are several new faces at the Brewton Medical Center these days. As some doctors move or retire, others are making the move to Brewton.

One of those is Dr. Aaron Morgan. Dr. Morgan is not exactly new as he has been in practice here for several months. He works out of what was Dr. Southworth’s office in the medical center.

“Coming from Laurel, Miss., I grew up in a small town and Brewton seemed as if it would be a good fit for me,” Morgan said. “I like the atmosphere of living in a small town and getting to know your patients. You just can’t have the close relationship in a large city.”

“One of my goals is to work toward having a critical care office that patients can make use of instead of the emergency room,” he said. “We hope to work with the hospital to get those who are not emergencies to take advantage of  having an alternative. We will be here from 8 a.m. until 5 p.m. five days a week and we’ll work hand in hand with the hospital on this.”

Dr. Morgan is married and has three children. He said he is happy to be in Brewton and looks forward to working with everyone here.

“I will be able to order tests, examine, diagnose and write prescriptions for patients,” Kennedy said. “I will be working with Dr. Morgan and he will be making the decisions as to just what I can do. This will take some of the workload off his shoulders.”

Kennedy lives in Flomaton but she grew up in Jay, Fla. Most of her 12 years of experience has been in the emergency room, but she has also spent quite a bit of time at Jefferson Davis Community College in the nursing program as an instructor. She has worked at Century Medical Center in Century, Fla., Jay Medical Center in Jay, Fla., Baptist Ladies First in Pensacola, Fla., Baptist Medical Group in Century, Gastroenterology Associates in Pensacola, and Baptist Medical Group in Pensacola. She comes to her new position from Jay Hospital and as an instructor at JDCC.

Kennedy is currently working on her doctorate from the University of South Alabama.

She graduated from Jay High School in 1996 and has two children.

Couch to retire after 65 years as chiropractor