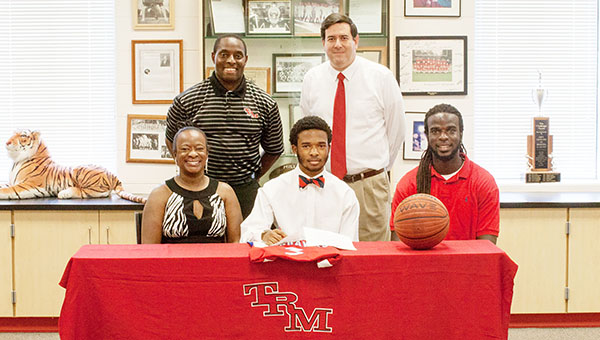 The Jefferson Davis Community College Warhawk basketball team has added a local player as they have signed former T.R. Miller basketball player Trae Walker.
JDCC head coach Allen Gainer said he is very excited to have Walker join the JDCC team.
“(TRM head) Coach (Juan) Johnson has done such a great job of developing Trae into a tremendous scoring threat, whether from 3-point range or off the drive,” Gainer said. “As much as I liked him during the season last year and when he came and worked out for us, the thing that put us over the top in deciding to sign him to a scholarship was him taking my class this summer.”
Gainer said over the course of the summer he got to know Walker as a person better and saw firsthand his character and outstanding commitment to being excellent in everything that he does.
“His drive to do everything perfectly no matter how many times he had to try makes him exactly the kind of person we want in our program,” Gainer said. “I expect Trae to immediately be a leader for our team, as well as on our campus, and we are thrilled to have him as a Warhawk.”
Walker said it feels good to sign with JDCC.
“A lot of hard work over the last fours years as me and my senior class help to rebuild Miller basketball,” Walker said. “This is a dream come true, to get play at the next level. All this would not be possible without my mother and brothers who always pushed me to do my best all my life. I also want to thank my teammates and Coach Johnson.”
Walker, who has signed to play as a combo guard at the point and as a shooting guard, said he wanted to stay close to home.
“Coach Gainer gave me a opportunity to help further my education and continue to play the game I love,” he said. “It just felt right. I plan to just continue to work hard, develop my game and help JD to be competitive. Hopefully things will work out where I get the opportunity to play at a university after junior college ball.”
Walker’s high school coach Juan Johnson said he is very happy for Walker.
“He is a exceptional young man not only athletically but also academically,” Johnson said. “I’m glad he is getting the opportunity to further his education and playing career.”
Johnson said a big part of TRM’s success and turn around is do to him and his leadership.
“He is the first point guard I had the opportunity to spend four years with,” he said. “When I became the head coach, I bought him up from B-team to be my floor general. I think he is going to do a outstanding job for Coach Gainer at JD. I look forward to seeing him play on that level he is going to surprise some people.”