Game will be played at TRM 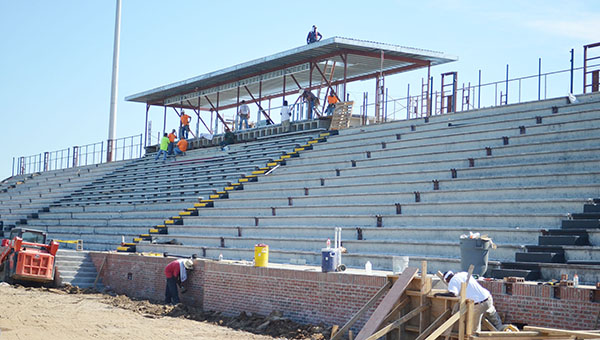 With the start of the 2015 football season just a little more than two weeks away, the question in every T.R. Miller fan’s mind is if Brewton Municipal Stadium will be ready for the season opener against the Andalusia Bulldogs on Aug. 21.
Brewton City Schools Superintendent Dr. Kenneth Varner knows that the community is thinking it.
“That is one of the windows that we have in the school system is through athletics and extracurricular activities,” Varner said Tuesday. “That is the community’s opportunity to come see what happens on that football field and with the band. It is a reflection on everything that we do. That is an opportunity for us to put ourselves on display for the general public.
“They know that, and they are excited about that, but they are also anxious about the stadium.”
Varner said that he and others have been working closely with the contractors and the architects to make sure that they will be able to play the first game against Andalusia in the stadium and he is confident it will be ready.
“Obviously, we are going to be cutting it close,” he said. “There is a lot of work to be done and there is not a lot of time left. As we get closer and closer to that first football game, we are starting to get confident that yes, everything is going to be fine, and we are going to be able to play that first game.”
Varner said he recently had a meeting last week with the architect, the contractor and the state building inspector.
The state building inspector is the one that says, ‘yes we can go in or no we cannot go in,’” Varner said.
“Our primary concern is the life safety issues,” he said. “That means that any safety issue is being taken care of. We have to make sure that we have all the handrails up, all the steps and handicap ramps, all the fencing around the perimeter of the bleachers, and all those other life safety issues in place so no one would get hurt up there. We feel like from that standpoint there is not going to be anything to prevent us from playing our game against Andalusia on Aug. 21.”
Varner said they have to make sure they have some temporary fencing set up to enclose some of the staging areas and construction areas where construction is still ongoing.
“They are supposed to already be adjusted,” he said. “They are configured on that pole by computer that when they laser-set that pole. It is set precisely to where it is supposed to be and light the field appropriately. So, they will have to turn those on and test the light system.”
While some things are in place to be ready for the first game, Varner said there are some things that will not be ready.
“The things we know that will not be ready is that the new scoreboard will not be in yet,” he said. “We are expecting that to be installed between the first home game and the second home game, which will be the third week of the season. So there is a two-week window when we expect to have that new scoreboard in. So for the first game, we will run the old scoreboard and be OK with that.”
Varner said the coating that they will put on the bleachers to give them a new look will not be on them for the first game.
“We are going to wait until we have the handrails installed before we start applying coating to the bleachers,” he said. “We are confident the handrails will be installed. We just don’t think we will have enough time to get those bleachers coated before that first game.
“We also know that our sound system will not be in yet and we will have to run a portable sound system in for that. There are a few other cosmetic things that won’t be done, but for the most part, we are going to be in pretty good shape.”
As for the press box, Varner does not feel as confident as others that it will be finished.
“The contractor is saying it will be ready, but I am not sure I am as confident as he is,” he said. “But we will be prepared to play at our stadium whether the press box is completely finished or not.
“The first game will be played (in Brewton). That is what we are planning on as of right now.”
As for the baseball field, Varner said they are anxious to get going on that project as well.
“We know there are a lot of things that have to be done on the baseball field before the season gets here,” he said. “The grass and sod have to go down. We want that down and growing before the frost hits so we can have a nice playing surface to play on next spring when baseball starts.
“That is part of the project as well, but it is not our priority going into this first football game.”