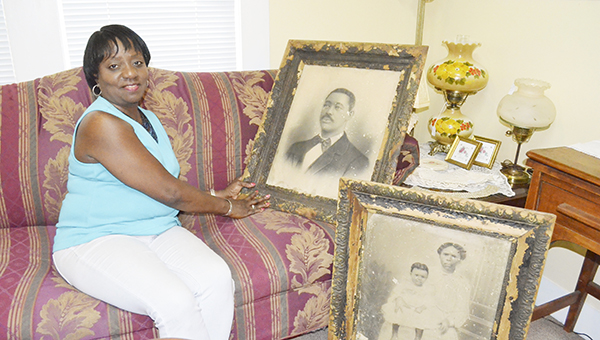 Valerie Long will never know, but the pieces continue to spark conversations – and the imaginations – of all who see them.
Long, owner of Longevity Antiques, said the each of the three pieces came to rest inside the Douglas Avenue shop in their own unique way.
The pieces appear to be either charcoal renderings or historic photos.
“It’s so hard to tell because they are so old,” Long said. “I don’t want to do anything to damage them, so we just speculate.”
One, she said, belonged to a family friend who asked her to house the piece for safekeeping. The other two, though, are part of a different story.
“There was a lady from the Bogia Community who read an article on my shop in the paper where I said I collected old black and white photos,” Long said. “She contacted me because she thought that I would be interested in a piece she had.
“Well, after her call, I thought I was going to get a couple of little photos, but when I walked in the door, I was blown away,” she said.
From inside a weather-beaten frame, the proud face stared back at her, she said.
“It was not a little photo; it was a piece of history with a background we’ll probably never know,” she said. “The lady told me she found it in the Pollard Community back in the 1960s. She said she was in the woods looking for old bottles when she came up on a dilapidated structure that looked like it used to be a house. One wall was still standing, and it was hanging there.”
Long said when the woman’s husband passed away, she decided to bring the piece to the shop.
“I’ve had tons of offers, but it’s just something that is so historic, I decided to hold on to it,” she said.
The other pieces, which feature a man and a woman in late 1800s-period style clothing, were found in an old barn. All of the works were reframed or reworked in their frames by local photographer Clay Lisenby, Long said.
“Those came from a dealer who traded me merchandise for them,” she said of the works. “He said he found them in a barn outside of Brewton and had no idea who owned them or where they came from.
“They’re just really great conversation pieces,” she said. “I’ve had historians and the lot to come and talk about them. They’re just interesting.”