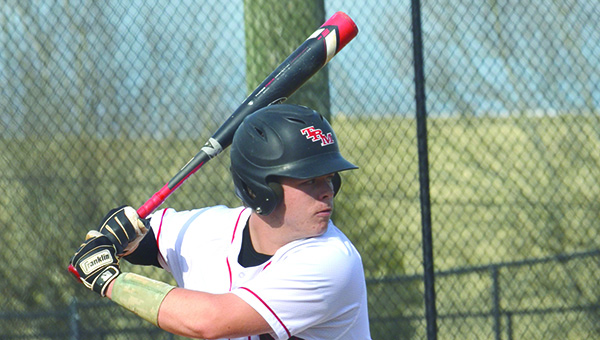 Another local baseball player may have the chance to play for Team USA baseball and compete for a gold medal. That is the case for T.R. Miller junior athlete Hunter Brittain as he is in the final stages of team trials for the 17U age group.
The National Team Identification Series (NTIS) is a USA Baseball player identification tournament that will take place in Cary, N.C. at the USA Baseball Complex.
“The tournament consists of teams from 16 regions across the United States,” Brittain said. “I have made Team USA’s Mid Atlantic Region roster.”
From this tournament USA Baseball will make another cut and invite players to be a part of a 40-man National Team Trials roster with the final goal of making the National Team USA.
Brittain began this process in June after trying out in Montgomery at the state level tryout, which were players from only Alabama.
“From that tryout, they made cuts and invited players to move on to the Regional tryout, which included players from Alabama, Georgia, Tennessee, South Carolina and North Carolina.
“The regional tryout was at Appalachian State University in Boone, N.C.,” Brittain said. “I made that cut to be a part of Team USA’s Mid-Atlantic Region roster. Hundreds of players from across these five states were cut to make this 18-man roster.
“This team will play in the NTIS on August 21-23 against the other 15 regions in the U.S.”
Brittain said making the National Team USA has been a goal of his for the past couple of years.
“I know how hard this will be but I’ll never know if I don’t try,” he said. “Representing my country while playing baseball would be an awesome feeling.
“This process has been challenging but a lot of fun. I’ve had the opportunity to see a lot of good baseball players during these tryouts.
“My dad went with me to the regional tryout at Appalachian State and we had a great time. It’s been an exciting summer.”
Brittain said the whole process has felt great and he feels pretty good about the state tryout.
“There were some really good baseball players in Boone,” he said. “Even if the road stops here, I’m proud that I made this regional team and have the opportunity to play at the USA Baseball complex. I’m just putting it in God’s hands and just trusting in His plan.”
During the whole process, Brittain said he has learned a lot about himself.
“I’ve learned that no dream is too big,” he said. “I think anything is possible if you just believe in yourself, work hard, and ask God to guide you along the way.
“I can’t even imagine how it would feel if I make the final team. Hopefully, I’ll get to find out.”
In 2012, former TRM Tiger and current Auburn Tiger Kevin Davis made the 18U national team and won a gold medal in South Korea.