‘It runs in the family’: Younger Coach Riggs excited for 2015 season 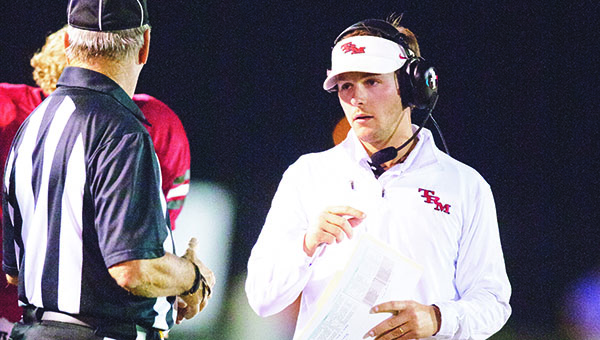 When one hears the name “Coach Riggs” in Brewton, their minds automatically think of Jamie Riggs—the legendary head coach of the T.R. Miller Tigers. Now, there are two “Coach Riggs” on staff at T.R. Miller and in the Brewton City Schools as Jamie Riggs’ son Mikel is entering his second season on staff with his the Tigers. The younger Riggs was recently named a physical education teacher at Brewton Elementary School after working last year in Monroeville.
Riggs, 27, graduated from T.R. Miller in 2006 and then from Auburn University in the spring of 2011. He coached at Foley from the fall of 2011 to 2013 and coached at TRM last fall. While at Foley, Riggs coached defensive backs. This past year at TRM, he was the offensive coordinator.
Riggs said it is nice to be back “home” in Brewton and to be working in the Brewton City Schools system.
“It is nice to be here and to be able to get more involved with the whole school system instead of spending nine hours a day at someone else’s community,” he said. “I get to live here and work here now. I get to invest in what was invested in to me and to give back a lot of it.”
“I will get to fully engulf myself in the TRM football world and Brewton City Schools.”
Riggs said the reason he wanted to go into the field of coaching is because it runs in the family and he saw how much his father loved the job.
“I can’t play anymore,” he said. “I am too old and not good enough to play anymore, so I just figured I would coach.”
Mikel said it is good to be able to work with his dad.
“We don’t get into too many fights,” Mikel said with a laugh. “The few that we have, I quickly point the reason why I think I am right and he is wrong. It does not end up going my way because he runs the show, and that is fine.
“I try to share a few ideas back-and-forth with him. I think I am right and he thinks he is right because he has done it for over hundreds of years. Some times I am right and some times he is right. It has been good though.
“We have a great relationship and we always have had one. Even when I was a player we never really had any issues.”
The eldest Riggs has put TRM football on the map with an impressive record. A graduate of TRM in 1974, Riggs was named head coach at TRM in 1989 after serving as assistant coaches at some other schools and as head coach at Opp three years prior. He has been in Brewton ever since.
He is entering his 27th season as head coach of the Tigers and has an overall record of 295-78. He is 283-59 as head coach of the Tigers of TRM and has won four state championships.
“Obviously, what he has done has worked.” Riggs said of his father. “For the most part, I try to stick to that and do that. Every now and then, I feel like I have an idea or two and I tell him about them. I have had a few ideas about the different ways we can practice and pass the ball.
“There is no new passing concepts or schematics, just a few new ideas on the way we do things. I am big into being organized and saving time, so if there is a way we can do things quicker or better, I try to voice that. We have had a few more trick plays that we have added since I have been here. Some have worked and some have not. It is fun working with him. I have been around him so much.”
Riggs played at TRM from 2002-2005 and was on the 2002 state championship team with his father—the Tigers’ last championship team.
Riggs said one day, it is his dream to maybe be head coach at TRM, just like his father.
“It is my dream to be a head coach one day somewhere,” Mikel said. “I would rather do it sooner than later. I don’t know if I will ever get the opportunity to be it here. If everything is right, I would love the opportunity. I want to be one somewhere, but this is a good place to be. It is a good place to coach football. It is a good place to live.”
Mikel said he is ready for the season to start.
“I am just fired up,” he said. “I love being here and I love these kids. It feels good to give back. That is the way I look at. I am able to give back into something that made me who I am.”
Mikel is married to the former Mallory Sigle. The couple is expecting their first child in October. Along with serving as a coach on the football staff, Riggs will also serve as the head tennis coach at TRM next spring.