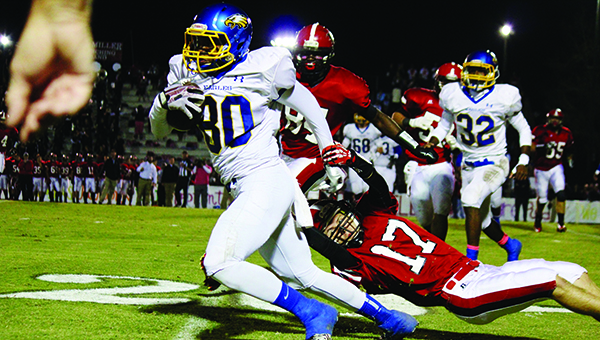 For decades the October Battle of Murder Creek between the W.S. Neal Eagles and T.R. Miller Tigers has been dubbed as the one of the state’s best football rivalries. Now, the nation will be able to see what the fuss is all about, County Schools Superintendent John Knott said Monday.
“I’m excited to tell you that this year’s Battle of Murder Creek has been chosen as one of the ‘Great American Rivalries’ series and will be televised,” Knott told members of the Brewton Rotary Club.
The game, which is set for Oct. 30 at Neal, was chosen by iHigh Inc., a web-based company, as part of its rivalry series, which according to its website, “shines the spotlight on top high school football rivalries across the nation, where long-standing traditions are valued, expectations are sky high, and fans fill the stands to cheer for their team.”
Since its creation in 1999, the site has grown to become one of America’s leading aggregation points for everything related to high schools.
The game will be live streamed on greatamericanrivalry.com, Knott said. Only the first week’s featured games are currently listed on the site; however, a news release states this is the 12th year for the site where it will feature “100 showdowns nationwide” in 40 states.
“Wrapped in tradition, these annual battles excite entire communities, while celebrating the schools, their teams, and their fans,” the site stated.
Knott said the local game is the only one chosen in Alabama this year, and “I’ve been told the second time ever that (G.A.R.) has hosted a high school rivalry in Alabama. Normally, they feature a big high school where there are tens of thousands of people in the stands.
“For our game to be chosen, it’s a big thing, a great thing for our system,” he said. “All of those eyes, it means camera crews and possibly scouts looking at our athletes. It could mean scholarship, and we’re excited about it.”