‘God was on our side’: Convicted murderer denied parole 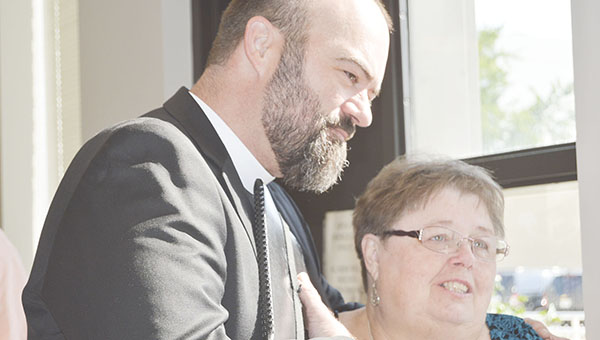 “We’re good. God was on our side,” said Sallie King Tuesday as parole was denied for the man convicted of the 1988 murder of her daughter, Stephanie.
For months, the King family has asked for community support in fighting the parole of Edward Russell Dubose. On Tuesday before the state parole board, Dubose officially asked for his release from prison. While not present in court, Dubose was represented by his attorney and a cousin – both of whom spoke of Dubose’s rehabilitative efforts and described him as a “model prisoner.”
King, who was surrounded by a gathering of family, friends and supporters, could hardly contain her relief as she dialed her daughter, Amanda, with the news.
“It’s over, at least for another five years,” King said of the process to keep Dubose behind bars. “Stephanie knows. She knows what happened here (Tuesday). She’s kicked backed smiling, knowing we fought for her.”
Miss King was a 16-year-old T.R. Miller High School senior when she was abducted from Alco Baptist Church on Oct. 22, 1988. She was raped, sodomized and strangled to death. Her body was later found inside her car, which was in a wooded area about four miles from the church.
Dubose was convicted of murder and sentenced to the death penalty in 1989. However, his conviction was overturned in 1995 by an appellate court, which ruled that a request for funds to hire an independent DNA expert for the defense should have been granted.
On Sept. 8, 1997, Dubose, who confessed to the murder, plead guilty to murder in Escambia County Circuit Court and was sentenced to life in prison with the possibility of parole.
Tuesday was his third appearance before the parole board.
In the months leading up to the hearing, the King family asked for public support in fighting Dubose’s parole.
“And they answered,” she said. “I brought 200 letters here myself, but I know that there were lots more sent up.”
More than 1,500 petition signatures and nearly 500 letters were presented by the Attorney General’s office to the parole board, and Escambia County Sheriff Grover Smith and District Attorney Steve Billy spoke against Dubose’s release.
The hugs and tears flowed Tuesday as congratulations and well wishes echoed through the hearing room. King, who repeatedly told The Brewton Standard previously that she looked for “God’s will” to be done, again echoed the sentiment.
“I believe in forgiveness and redemption,” she said. “Mine’s not there yet, but the good Lord is working on that side. I feel wonderful, like a hundred pounds is off of me.
“I really do pray that (Dubose) finds his way back to the Lord,” she said. “I can honestly say I don’t want (Dubose) to go to Hell, but I’m not ready for him to be out.”
Dubose is currently housed in Limestone Correctional Facility.