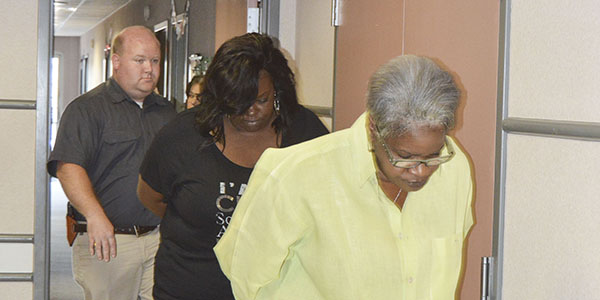 DHR workers Monique Pierre Louise and Marilyn Bass are escorted out of the building Friday by BPD Sgt. Patrick Caylor.

Lt. Brock Holt with the Brewton Police Department said the day’s joint operation between the BPD and the Escambia County Sheriff’s Office is the culmination of a two-year investigation.

“This case began after we leaned learned that the Social Security numbers and other identifying items of information from clients were being used at local a ‘fast cash, title loan’ location,” Holt said. “As of present, the group used the practice to obtain more than $40,000 in fraudulent loans.”

All are being held on charges of identity theft, fraud and using false information to obtain fraudulent loans. All were booked into the Escambia County Detention Center, with the exception of Anderson, who is

How Daniels and Anderson were involved in the alleged scheme or Louise’s and Bass’ positions at DHR was not released.

Holt said police are searching for two other suspects, identified as Jeffery Redmon and Nakia Nettles.

The Brewton Standard will update this story as more information becomes available.

‘God was on our side’: Convicted murderer denied parole