Pulled from the flames 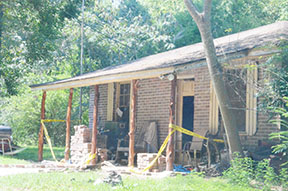 The front of MacArthur’s burnt house.

Last Monday night an East Brewton man’s life was miraculously saved from a fire at his home.
The rescue was a joint operation between the Brewton and East Brewton fire departments.
The victim, Leslie Daniel MacArthur, was taken to Sacred Heart Hospital, then transported to USA Hospital in Mobile. At 9:55 p.m. MacArthur made a 911 call.

However, help was not to arrive quickly as the dispatcher couldn’t make out the home’s exact location.
MacArthur, who was disoriented during the call, tried to give directions; however, fire personnel – including fireman Shane Cain – had to use their skills to find the home.

Brewton Fire Chief Jeff Sawyer said he was grateful of how the team responded.
“He would have died if it wasn’t for these guys,” Chief Sawyer said. “This is what we train for. It was a good combined effort.”

“It was like a wild goose chase. We thought the fire was in our jurisdiction, so we went around Brewton to try to find the fire,” Cain said.

The decision was then made to have the fire crew split to cut down response time. Some of the crew was on Sowell Road headed to Alco and some were located downtown.

“When we found out the location was in East Brewton, we had a rescue truck there in a minutes time,” Cain said.

At 10:01 p.m. the fire crew was at the house and found MacArthur in his bedroom.
Fireman Taylor Cash, who was one of the men to assist the victim out of the house, believes this was nothing short of a miracle. “The way everything worked, you couldn’t ask for anything better, Cash said.”

Cain agreed and said teamwork was a key.
“It was a combined effort that worked great between Brewton and East Brewton,” he said.
MacArthur’s son, Jeremy, said his father’s condition is better. “He lived alone with his two dogs,” Jeremy said. “‘Are my dogs alright?’ That’s the first thing he asked about when we first saw him. Those dogs are his life.”

Looking to change your life?