TRM was 5-2 against Bayside Academy prior to Friday’s game. TRM head coach Jamie Riggs said his team fought well the whole night against a tough team.

“Especially on defense,” Riggs said. “They were really tough defensively, and we finally made the big play we needed. We were close a couple other times, but finally we held those blocks, and Markail made a great cut and run to win the game.”

With the win, Riggs said he is proud the way his team has played so far. 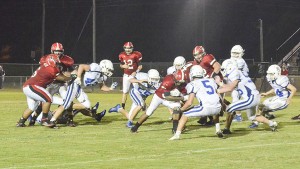 Helped by a host of teammates, TRM’s Markail Mitchell smashes through the Bayside defense Friday.

“We knew going into the year we had three really tough games to start the season,” Riggs said. “We won two of those three. I think that’s an outstanding job, especially after losing the first game the way we did, to comeback and win these two games says something about our toughness.

After a deadlocked first quarter between the two teams, the Tigers were threatening with less than two minutes left in the second quarter. Bayside would intercept a pass in the end zone to keep the game scoreless going into the half.

TRM received the ball first to begin the third quarter. The first drive for the Tigers in the third would prove to be their best sustained drive and lasted for more than four minutes but lead to a missed field goal. The score remained scoreless until late in the third quarter when senior running back Markail Mitchell broke free from Bayside defenders for a 72-yard touchdown.

With Bayside Academy threatening midway in the fourth, Bayside Academy junior quarterback Connor Sirmon threw a deep pass down field that would end up in the hands of TRM senior Chardian Johnson. He would return the ball 59 yards before finally being brought down.

Bayside Academy had one more chance to tie the game late in the fourth. With fourth down and less than 5 yards to go, Bayside Academy opted to run the ball. The ball carrier tried to turn the edge of the field but was greeted with a thunderous hit by senior linebacker Tripp Floyd. After a final measure of the ball spot went their way, TRM kneeled the ball to seal the victory.

Leading the Tigers was Mitchell with 106 rushing yards and one touchdown and Johnson with 96 total yards on offense, and one interception on defense.