W.S. Neal won a hard-fought battle at home Friday, defeating the Clarke County Bulldogs 15-0. The night’s win improves the Eagles to 2-0 overall and 1-0 in region play.

The Bulldogs’ received the kickoff to start the game, and took possession on their own 34-yard line. Five first downs and five penalties later, they found themselves facing a fourth down on the .5-yard line and an Eagle defense that had been on the field for almost the entire first quarter. 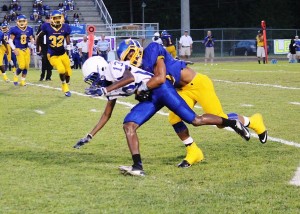 “That fourth down goal was a very big play for us,” Hoehn said. “That was a great team effort. They gutted it out, so we’re very proud of that. That was probably the moment of the game, without a doubt.” The Eagles were able to hold the Bulldogs and took possession of the ball on their own 2-yard line. There was only time for two plays before the end of the first quarter. The defense didn’t have much time to rest though, because two plays later, Neal was forced to punt, and Clarke County took over only 33 yards from the goal line. The Bulldogs were unable to gain a first down, however, and Neal’s offense got its first chance to shine.

The Eagles started a steady drive down the field, eating up yards on the ground and in the air, including an 11-yard pass from sophomore Jacobey Hawthorne to fellow sophomore Christian Wood and a 44-yard pass from J. Hawthorne to senior Malcolm Hawthorne. With just under two minutes left in the half, the Eagles faced a fourth down on Clarke County’s 6- yard line, when junior Phillip Roger kicked a field goal, putting the first points of the game on the board. With 1:46 on the clock in the second quarter, Neal took a 3-0 lead. This score still stood when the buzzer sounded, sending the teams into the locker rooms.

The Eagle offense was more effective in the second half.

“(The Bulldogs) came out with a little different look than what we saw on film,” Hoehn said. “We talked about it at halftime, and the kids did better in the second half adjusting to it.

“A couple of times we had a couple of penalties that hurt us a little bit, just missed a couple of really deep balls that were almost there, but I’m just so proud that they can make the adjustments that they have to make to put points on the board,” he said.

The Eagles received the kickoff to start the second half of play, and they wasted no time making use of their possession. With 11:05 left in the third quarter, senior Quentin Samuel ran 63 yards for a touchdown. The two-point conversion was no good, but Neal increased their lead to 9-0.

The Eagles managed to recover the kickoff when the Bulldogs bobbled it, and though they didn’t convert it, they kept the ball away from Clarke County’s offense for a while longer. Clarke County and Neal each had one more possession to finish out the third quarter, but neither scored. The Bulldog’s were forced to punt just after the fourth quarter began, and Malcolm Hawthorne ran the punt back 50 yards for a touchdown. The PAT was no good, so with 11:30 left in the game, Neal led Clarke County 15-0.

The Eagles kicked off to the Bulldogs, and senior Troy Lewis sacked Clarke County’s quarterback, RaShon Horn, for a 7-yard loss. Horn completed a 9-yard pass to Arthur Yelder, but when Horn attempted another pass, it was intercepted by senior Dakota Graves who ran it back 19 yards to the 17-yard line. This was the last big play of the game.

Clarke County would have three more possessions and Neal would have two, but though both teams fought hard, neither was able to score again.

“The kids played hard (Friday), and that was a very good football team that we played,” Hoehn said. “It was very humid out, and it was a very physical game by both teams. I’m proud of our kids. They really hung in there, and they made the plays when they counted.

“Clarke County played their guts out, too,” he said. “I want to give them all the credit in the world, but I’m just so proud of our kids. Any adversity we had from here to there in the game, they overcame it and did what they had to do to win the game. We have a great bunch of kids this year.”