Both Miller JV and varsity teams picked up wins against Flomaton Thursday evening.

TRM  varsity would defeat Flomaton in three sets. In the first set Miller pull out the win 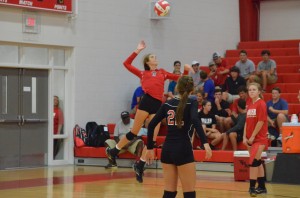 Allie Nelson serves the ball. She led the team in kills for the night.

TRM volleyball coach Terri Lynne Peacock, likes how her team responded to Flomaton’s quick start. “Flomaton showed up ready to compete,” Peacock said. “We played from behind the majority of the first game. We showed some toughness at the end settling down to get the win.

TRM won the second set 25-14. The third set was another tough battle for the Lady Tigers after a late rally by Flomaton, but the Lady Tigers hung on winning the game, 25-22.

“We were able to find our rhythm in games two and three,” Peacock said. “It was a great night of competition. We like to play teams that make us step up to the challenge. It makes us push ourselves to get better.”

TRM JV and varsity will be back in action Tues., Sept. 15., at the Brewton Middle School gymnasium.

Varsity will face Hillcrest at 4:30 p.m.