It may take a village to raise a child, but it takes a lot of volunteers to make sure that some things get done. It may come as a surprise to some, but volunteers sometimes are what makes the difference of getting a project done or not.

One such volunteer is Joel Migas, who is the fire chief of the Dixonville/Riverview Volunteer Fire Department.

In fact the fire department depends on the skills of not only Migas, but also his two brothers. These three brothers all work for the fire department and two of them are in business together at the Auto Clinic in Riverview. It is truly a “family” affair.

“I have a great family,” said Migas. “We truly love each other and work together. We even all moved from Chicago to Brewton to make our homes.”

Migas was born and raised in Illinois. He attended and graduated from Hillcrest High School in 1989.

“We lived in a pretty rough neighborhood in Chicago,” he said. “In fact it is a wonder we all survived. I give my parents all the credit for raising us the right way.

“I joined the Air Force right out of high school,” he added. “I got into Special Opps based at Eglin.” 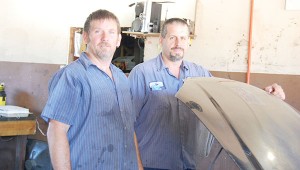 Joel Migas, right, works with his brother, Jim DeRidder, left, at their business in Riverview.

Not only was he in the military, his wife was also. It was when she was sent to Korea that he decided to leave the military.

“I took over the job of looking after our children and knew that I wanted a better life for them,” he said. “My parents were already living in Brewton and it seemed like that would be a good place to raise the kids.”

Soon the whole family had moved south and now the brothers work together, in their business and on the fire truck.

Migas said  he sort of just fell into working with the fire department.

“I was driving along and spotted a fire, so I stopped to help,” he said. “I guess I was hooked after that. One of my brothers works here at the Auto Clinic with me and our other brother is retired from the military so he is always near by.”

Migas and his brother, Jim DeRidder, work together in the business and Migas said they manage to be be a big part of the volunteer fire department.

“When we are called out to a fire, if we need to, we close the doors to the business and go take care of the fire. When both of us are not needed at the fire, one is able to take care of the business, but the fire has to come first. We have around 22 members and maybe 12 of them are active. Right now we have a couple in training and we have to stay on top of that. We have one fire truck and a rescue truck. I modified it here in my shop and added a water tank and hose to it so now it has become very useful to us.”

About 15 years ago, Migas and his brother, Jim DeRidder opened the Auto Clinic at Riverview. All of the brothers had learned how to work in a garage with their father. Migas had a lot of on-the-job training and it was just what he needed in his own business. They paid off their mortgage a couple of years ago and are enjoying not having that to worry about. Life is finally a little bit easier, but it hasn’t slowed too much at this time.