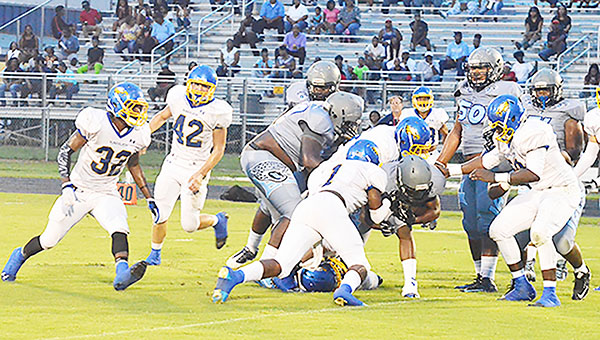 WSN earned a big win Friday as the team traveled to Tallahassee, Fla., to take on the East Gadsden Jaguars. Here, a host of Eagles down the runner near the 20 yard line.

In a physical battle on the gridiron, the WSN Blue Eagles defeated the East Gadsden Jaguars, 10-6.

“Our kids didn’t back down,” Hoehn said. “It was a hard hitting game on both sides. Both teams left it all on the field. What it came down to is we made less mistakes then [East Gadsden]. Usually if you play hard and make fewer mistakes you give yourself a chance to win. When it came down to the wire we were fortunate enough to win it.”

The game remained deadlocked at zero with little over a minute in the first quarter until WSN senior Troy Lewis intercepted a pass by East Gadsden quarterback Thomas Jones for a touchdown return of 79 yards.

In the second quarter WSN would add three more points on a 29 yard field goal by Phillip Roger. The first half would end with the Blue Eagles leading 10-0.

A little over midway into the third quarter East Gadsden would finally break the score column on a nine yard quarterback scramble. They would miss on the extra point to make the score 10-6.

The final minutes of the fourth quarter would test both teams’ physical and mental toughness. WSN looked to score at the end of the fourth to make matters worse for East Gadsden but a fumble on their opponent’s five yard line gave East Gadsden a chance for a game winning drive. East Gadsden worked their way to WSN’s 28 yard line with 40 seconds left to go. East Gadsden attempted a pass to the end zone for the win, but WSN senior Malcolm Hawthorne would spoil the attempt with an interception for a touchback. The play would prove redemptive for Hawthorne since an earlier fumble on the five yard line set up an opportunity for the late quarter drive for East Gadsden.

Coach Hoehn praised the way his defense handled the final drive of a tough fought game. “We told our guys they have to line up quick. We knew [East Gadsden] was going to get back on the line of scrimmage fast, “he said. “ Our kids did a great job. They got lined up. They sprint back off the tackles. We didn’t break many assignments on defense. East Gadsden is very physical and I’m very proud the way we played.”

Leading the Blue Eagles on offense was Malcolm Hawthorne with 17 carries for 141 yards and Quentin Samuel with 14 carries for 77 yards. Leading on defense was Troy Lewis with 7 tackles and one interception and Dakota Graves with 7 tackles.  East Gadsden committed fourteen penalties for a total of 115 yards.

Next game WSN (3-0) will travel to play regional rival UMS-Wright (3-1). Both teams are undefeated in the region. Kick-off is at 7 p.m.

Game preview: Another tough test this week against UMS