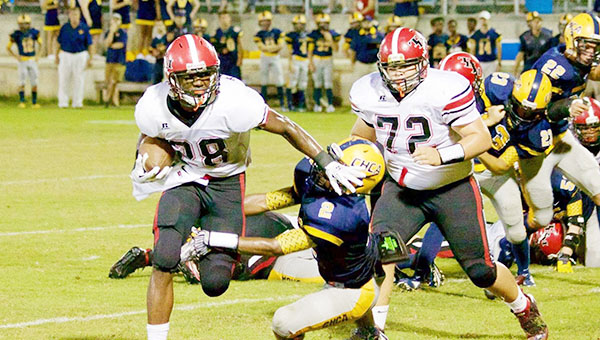 Ahmaud Taylor carries the ball during one of Miller’s touchdown runs Friday night.

While the T.R. Miller defense continued doing its thing Friday night at Cottage Hill, earning its second straight shutout, the offense was able to compliment throughout the night. The result was a 48-0 win that pushed the Tiger’s Region 1 record to 2-0.

That swarming defense – anchored by senior linebacker Tripp Floyd, who had 11 tackles –  now has 10 straight quarters where the opponent has not scored a single point, dating back to the third quarter of the Tallassee game three weeks ago. In the meantime, defensive coordinator Chris Baxter’s squad has stopped four drives inside its own 5-yard line. On Friday at Cottage Hill, they stopped one such drive and ended the night with three take-aways – two fumble recoveries and a “pick-6” interception from senior Alex Daugherty, who returned it 38 yards for a touchdown. Both Ty Lett and Tamerick Jenkins had fumble recoveries, and Tyrese Nicholson added eight tackles.

From the offensive side, the Tigers scored early and often. In their first four offensive plays, in fact, they scored three times, building a 21-0 lead barely six minutes into the game. By halftime, the Tigers – who had only averaged 8 points per game before Friday – had put 35 points on the board with 240 total yards. They would finish the night with almost 400 total yards, 217 on the ground and 180 through the air.

In the three previous games the Tigers have failed to score in the first half. TRM head football coach Jamie Riggs focus for his team was to start early. “We wanted to start fast and I thought we did that,” Riggs said. The second half we were able to continue the pace. Usually when you get a lead you kind of get relaxed and complacent. Our players did a nice job handling the lead.”

While the Tiger running attack was led by first-half touchdowns from seniors Chardian Johnson (18 and 4 yards), Markail Mitchell (89 yards), Tamerick Jenkins (18 yards) and Ahmaud Taylor (12 yards), the shotgun passing attack provided a good balance as well. Junior quarterback Caleb Winton completed 6-of-8 passes for 161 yards, including a 58-yard touchdown pass to Taylor. Taylor was a formidable target, as he caught five passes for 135 yards. Johnson was 1-of-3 passing for 19 yards. Mitchell rushed for 109 yards on seven carries to lead all runners.

The Tigers (3-1 overall) didn’t take long to gain control of the game. After sophomore Ty Lett recovered a Cottage Hill fumble at the 18-yard line, Johnson took the snap in the Wildcat formation and broke two tackles on the way to the end zone for the first score. Hunter Brittain connected on his first of six PATs to make it 7-0.

After forcing a punt that placed the ball at the TRM 11, Mitchell took the second offensive snap of the night and broke around the left side untouched for 89 yards and a touchdown to make it 14-0. Following a short punt on Cottage Hill’s next possession, Winton connected with Taylor for 33 yards, leading to a four-yard Johnson run to make it 21-0 midway through the first quarter.

Jenkins would add an 18-yard TD run and Taylor another from 12 yards out before the half to make it 35-0.

Within two minutes of starting the second half, the Tigers scored on their first offensive play (52-yard pass from Winton to Taylor) before Daugherty jumped the route and picked off a Cottage Hill pass, returning it 38 yards for the final score of the night.