Tuesday evening TRM volleyball remained undefeated. Varsity played two games, defeating area rival Hillcrest 3-0 in the first game then Jay, 3-0, to round out the night. The JV beat Jay JV in straight sets: 25-5, 25-15. With the win the JV team improves to 10-0.

TRM varsity won the first set against Hillcrest, 24-14. The second set would be close but the Lady Tigers were able to get the win, 25-22. TRM would close out the match winning the third set, 25-18. The win improves TRM’s area record to 2-0. 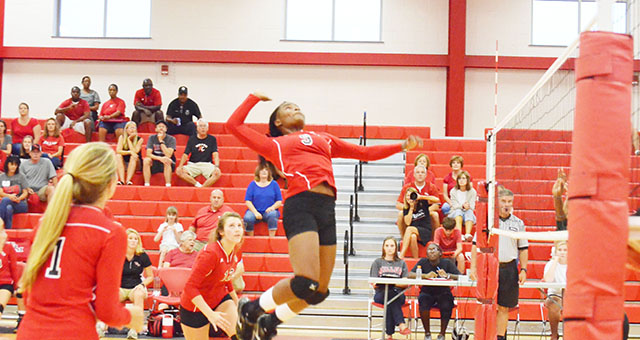 Senior Mykayla Harris led the team in blocks and kills for the night.

The Lady Tigers won the first set, 25-14. The second set went down to the wire with TRM edging out the win, 25-22. In the final set the Lady Tigers would win 25-18 to take the match and improve their overall record to 7-0.

Volleyball head coach Terri Lynne Peacock is proud of how strong her girls played throughout the night, especially in serving. “Our serving game was strong during both games tonight,” Peacock said. “Being consistent behind the service line makes a difference in the flow of our game. We have some strong servers who step up behind the service line with a game plan.”

Next match the Lady Tigers will travel to play W.S. Neal. The game will be played at the Neal Middle School. Start time is 4 p.m.