T.R. Miller junior baseball player Hunter Brittain has been selected to the 40 man 18U National Team Trials roster. These trials will begin i n June 2016 in Cary, NC. During these trials, another series of cuts will be made to narrow the team to the final 20 players.  This final 20 players will be the 18U Team USA which will represent the United States in the 2016 18U WBSC World Cup. “I’m really excited about this opportunity,” Brittain said. 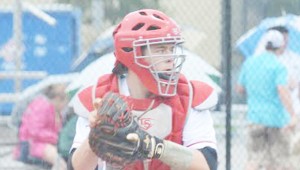 Hunter Brittain attempts to throw out a runner.

“I can’t wait to go back next June to North Carolina. I feel very blessed to have made it this far. The support from my family and everyone in town has been awesome.”

This past summer Brittain began the tryout process for USA Baseball’s 18U USA National Team.

He made it through the state tryout and regional tryout to make Team Mid-Atlantic which played in the NTIS (National Team Identification Series) Tournament in Cary, NC in August. This tournament was made up of 16 teams representing all regions of the United States. From this tournament, Brittain and seven other players were selected to the 40 man 18U National Team Trials roster.

Earlier this month USA Baseball 18U National Team defeated Japan 2-1 to win the 2015 WBSC 18U Baseball World Cup. It is the team’s third consecutive world championship.