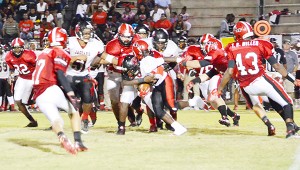 Tigers pounce on a Hillcrest runner during Friday night’s win.

In the trenches, the Tigers led the charge on a nine-play, 60-yard game-winning touchdown drive that defeated a talented Hillcrest team, 30-20, at Brewton Municipal Stadium.

As an inexperienced line that had to grow up quickly, the Tiger offense averaged just eight points per game the first three weeks of the season.

In the two weeks since, the Tigers have parlayed more experience into more points, scoring 78  in the last two games en route to a 4-1 record at the halfway point of the regular season. Better yet, the Tigers improved to 3-0 in Class 3A Region 1 play with the victory over the Jaguars.

In the meantime, the defensive line was spectacular as well, playing spoiler to a highly-vaunted Hillcrest offense by recording seven tackles behind the line of scrimmage and putting enough pressure on the Hillcrest quarterback that the secondary was able to break up four passes and record two interceptions.

While the line was opening gaping holes for senior running backs Ahmaud Taylor (134 yards, 21 carries) and Markail Mitchell (83 on 13), it did its best work nursing a 24-20 fourth quarter lead with consecutive long, sustained drives that sealed Hillcrest’s fate.

On the first drive, the Tigers started at their own 5 and booked a 13-play, 86-yard march that chewed up nearly six minutes off the clock. Although the drive did not culminate with any points, it did eat up precious time, and it wedged the Jaguars deep in their own territory. Three plays later, when senior safety Chardian Johnson went high to intercept a pass, it jump-started what proved to be the game-winning drive.

Just under six minutes remained when the Tiger offense took over. By the time the 9-play, 58-yard drive was over, and Mitchell bulled over from the 1-yard line, only 1:10 remained in the game. Only once in that drive did the Tigers face a third-down opportunity, and Taylor covered the needed five yards to extend the drive. For the night, the Tigers converted on 6-of-10 third-down opportunities.

T.R. Miller head coach Jamie Riggs said he liked what he saw from his young team but believes they can improve even more.

“I thought we were a little sloppy at times,” he said. “Sometimes we did things well; some times we didn’t do things so well, but we still managed to win.

“Overall I don’t think we played our best game on either side of the ball but we are hanging in there. Hopefully we’ll continue to get better, especially as we get deeper into the season.”

Hillcrest got on the board first after it turned an early Tiger interception into points when quarterback Tyrell Riley connected with Javarious Betts for a 1-yard touchdown. When the conversion pass failed, the Jags had their only lead of the night.

Michael Campbell answered the Hillcrest score by returning the ensuing kickoff 84 yards to the 1-yard line, setting up Johnson’s plunge into the end zone. Hunter Brittain’s first of three PATs put T.R. Miller ahead 7-6 and the Tigers never trailed again.

On the Tigers’ next possession, Mitchell booked runs of 19 and 14 yards before Taylor finished the drive off with a 4-yard run to make it 14-6. After a Jaguar punt on their ensuing drive, quarterback Caleb Winton (8-of-10, 103 yards) found Johnson in the front corner of the end zone for a 31-yard touchdown strike that gave the Tigers a 21-6 lead midway through the second quarter.

Hillcrest put a TD and two-point conversion on the board in the third quarter to make it 21-14, then followed a Hunter Brittain 32-yard field goal with a botched snap on a punt that turned into a 66-yard TD scramble by Riley to make it 24-20.

That score set up the two time-consuming drives that finally won it for the Tigers.

While the offensive unit was doing its part in carrying the load, the defense was led by Brittain, the junior linebacker who had 9 tackles and an interception. Hayden Atkinson and Tripp Floyd added 8 tackles each.

The Tigers will host non-region rival Escambia County High School this Friday. Kickoff is at 7 p.m.