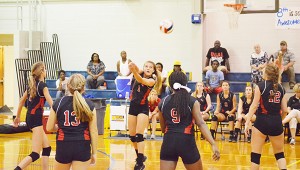 The undefeated TRM volleyball team faced a tough battle Thursday evening against cross-town rival W.S. Neal. The Lady Tigers would take the match 3-0, but in no sense was the match a one sided affair between the two teams.

TRM head volleyball coach Terri Lynne Peacock, a former player now entering her first game as a coach in the rivalry, is no stranger of how high the stakes get when playing Neal. “Tensions are high and you know anything can happen,” Peacock said. “The Neal and Miller rivalry is still the same way I remember it nine years ago.”

Neal head volleyball coach Jason Blaney loved the competitiveness in the match. “What a great match,” Blaney said. “Miller is well coached and I think our girls stepped up big time versus a strong Miller team. Every set was competitive.”

In the first set Neal pulled out the gates quick. It wasn’t until a go-ahead point, compliments of junior Taylor Austin, that Miller took the lead 21-20. Miller would close out the set strong scoring four more unanswered points to win the set.

An ace by Neal senior Karissa Johnson would start off the second set. The Lady Eagles would go up 5-2 early, but Miller would score five of the next six points to make it even at 6-6. Miller would gain a small lead until Neal would even the score again at 11-11. Miller would go on to score four unanswered points. Neal answered back taking two of the next three. Miller would close out the game strong to win 25-22.

The third set was deadlocked at 15-15 until a Neal spike over the net would give the Lady Eagles the go-ahead point. Neal would score the next four points to take the lead 19-15. Miller rallied back to even the score with a kill by senior Mykayla Harrison. With Miller leading 24-22, Neal would fight to stay alive. Neal would even the game 25-25. Going down to the wire, Miller would win the next two points for the set and match win. 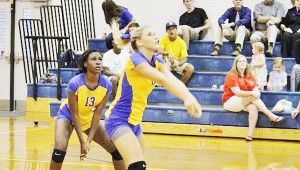 Despite the outcome, Blaney was proud of the way his team performed. “I hate that we came up short and lost, but I do believe it was some of the best defensive volleyball we have played yet,” Blaney said. “I believe we will carry that excitement and momentum with us throughout the rest of the season.  We have an aggressive attack game. We didn’t get into that as much as we would like but we still played great which excites us all for the rest of the season.”

Peacock believes the intensity of the game was a great learning experience for her team moving forward in the season. “Neal played all three games with intensity tonight and we were proud to get the win,” Peacock said. “Neal exposed some areas of weakness that we will address and hopefully become a better team after correcting.”

With the win Miller varsity improves to 8-0. With the loss Neal drops to 1-7.

Miller and Neal volleyball will face off again Thurs., Oct. 1.