There are changes going on in the Escambia County Courthouse. People are retiring and others are taking their places.

Tim Pettis is one of those as he becomes the new tax collector for the county following the retirement of Joy Wiggins.

Pettis is new to public office, but said he believes that he is ready to take on the position.

“I have spent my whole life in a business where we serve the public, so I think that this job will be a continuation of helping people,” he said.

Pettis takes office in the busiest time of the year, and said that he will probably be so busy that he won’t have time to think.

He knows he can rely on his staff of workers to be there when needed, and Wiggins has promised she is only a phone call away if he needs to talk to her.

“Joy has been very helpful already,” Pettis said. “She has taken the time to help prepare me as best she can. The job is a people office and that is who I am. I am just like those who come into the office for service and my doors will be open to any of those who need my help.

“Letters are all ready to go out reminding people that it is the time of the year to pay their property taxes,” he added. 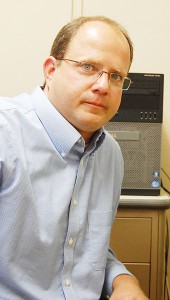 Several years ago the change was made to make buying a vehicle tag a one-stop shopping experience instead of a trip to the tax assessor, tax collector and probate offices. This has worked out very well.

Pettis may be nervous about his new position, but he doesn’t show it.

“I will learn what I need to know and until then, I have my staff to help,” he said. “I want the people to know that I am trying to do the best I can and if they would like to visit me in the office, I would be happy to see them. I want to be as helpful as I can.”

Pettis was born and raised in Escambia County. He attended T.R. Miller High School and graduated from there in 1996. In many ways he was a typical teenager, playing all kinds of sports and enjoying his youth. One difference between him and many others his age, was the fact that he spent a lot of time helping out in the family business. Bracken’s has been a landmark in Brewton since 1963 when his grandfather opened the restaurant. Most, if not all, members of the family have spent time working there in various capacities.

“I think my experience working there will help me in my new position,” he said.

A few years ago, the family began to think about retiring, which led Pettis to think more about his future. A couple of years ago he married his wife, Paula, who works at the Leigh Place. He also became a stepfather to two girls, Sarah Grace (14) and Lauren (12).