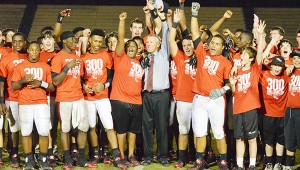 Coach Riggs celebrates his 300th win with his football team after its victory over Escambia County, 42-18.

“I think about all the people from the past who had a big part in this,” said Riggs. “The great players and all the coaches who put up the time.

“My family has sacrificed a lot for me to do this,” he said. “It’s been a team effort to get to this point. I hope that they share and enjoy all of this because they are a part of this as well.”

In the first quarter, the Tigers would score first on a 28-yard run by senior runningback Ahmaud Taylor. The Blue Devils responded two minutes later on a 50-yard touchdown pass by senior Rashaan Taylor to senior Tyderian Sims. Sims would take the pass down the sideline for the score. Escambia County would attempt a two-point conversion but fail making the score, 7-6. Later in the first quarter with just over a minute left, the Tigers would score again on a 5-yard run by Taylor. The Tigers kicker, Hunter Brittain, would add the extra point to bring the score to 14-6.

Escambia County would score again midway through the second quarter on a 51- yard run by senior runningback, Timothy Finklea. The Blue Devils would again fail to convert its attempt at a two-point conversion, making the score, 14-12. With 36 seconds left in the second quarter, Tiger senior Michael Campbell would punch in the score on its own one yard line. Adding the extra point, the Tigers would go into the half up on the Blue Devils, 21-12. 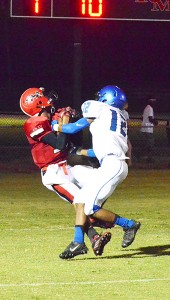 With 10 minutes to go in the third, the Tigers added to their point total on a 22-yard touchdown pass by junior quarterback Caleb Winton to senior wide receiver Chardian Johnson. After a forced fumble by the Tiger’s defense, compliments of sophomore linebacker Hayden Atkinson, the Tiger offense would score again with 6:30 left in the third quarter on a 41-yard touchdown run by Taylor, his third of the game.  The third quarter would end with the Tigers leading 35-12.

The Tigers would strike again midway through the fourth on a 12 –yard pass from Winton to Johnson. Brittain would add the extra point to extend the Tiger lead, 42-12. With a minute left in the fourth quarter the Blue Devils would score on a 7-yard touchdown run by Tyderian Sims, his second touchdown of the night. The Blue Devil would fail to convert a two-point attempt. The Tigers would run one more play to run out the clock and win the game, 42-18.

Riggs says his team came out and played more focused in the second half. “We gave [Escambia County] a couple of big plays in the first half, “ Riggs said. “In the second half I think we came out with a little more intensity. We put ourselves in good field position to put up points.”

Leading the Tigers was Ahmaud Taylor who had 22 carries for 189 yards and three touchdowns.

With the win the Tigers improve to 5-1. Next game the team will travel to face regional rival Opp (4-1). Kickoff at 7 p.m.

Game preview: WSN at home vs Monroe County in…