The football and baseball field construction projects are progressively moving forward says Brewton City School superintendent Kenneth Varner. “There is still a lot of work to be done but this week has seen a lot of progress made with both phases of the building project,” he said.

Phase one involves the football stadium renovations consisting of a new press box, new scoreboard, concessions and bathrooms. Phase one started earlier this year with a deadline goal set for Aug. 10, in time for the football team’s first home game. Varner said there have been some setbacks resulting in the delay but the project is coming together.

“The press box is usable,” Varner said. “The electrical wiring is done. There is some painting on the inside that needs to be done.

“The ladder leading to the top of the press box still needs to be installed.” 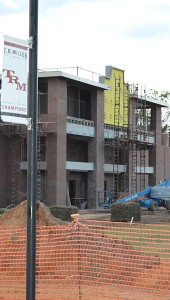 Construction is coming along at the T.R. Miller campus.

To add to the pride and décor of the stadium Varner said they are working with a flag company who is submitting designs of flags that will be used at the stadium. The flags will represent the six football state championships at TRM.

“The flags will line the back of the stadium,” Varner said.

Phase two of the construction project is the baseball field. Along with the field a new concession stand complete with bathrooms will be built on the north end side of the lot, said Varner.

“The grass is being laid down,” he said. “The black poles supporting the backstop are in place. Some of the future work to be done is building the dugouts, stands and installing the fences, scoreboard and sound system. Phase two is scheduled to be completed by Dec. 31.