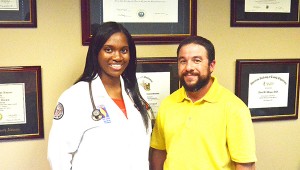 The Brewton Medical Center has opened its doors to welcome Jakai Nolan, a student of the Philadelphia College of Osteopathic Medicine’s Georgia campus.

Nolan, who graduated in 2005 from Stockbridge High School in Stockbridge, Ga., earned a bachelor of arts in neuroscience from Vanderbilt University and a graduate degree at Emory in public health, is working toward her final goal – becoming a neurologist.

“Right now, I am leaning toward a specialty in multiple sclerosis,” Nolan said. “The brain fascinates me; it’s a puzzle. I like to take those pieces and try to figure out what is going on, what in the body is causing the problem. It’s fascinating.”

Nolan is the daughter of Jeff Nolan, formerly of Brewton, and granddaughter of Nettie Nolan and the niece of Phyllis Carter, both of Brewton.

She is currently working with Dr. Aaron Morgan at the Brewton Medical Center as she works toward becoming a doctor.

“I was surprised at the beginning of my third year to learn that they have training at D.W. McMillan Memorial Hospital,” she said. “Since I had to fulfill a rural med rotation, I reached out to the hospital to see if they had doctors willing to take students. They put me in touch with Dr. Morgan, who said he’d love to take me.”

“She has been a real good student.” Morgan said of Nolan. “She’s a Vandy grad so she’s smarter than all of us here. All of the patients have said you got to keep her. They really like her, and that’s important in small towns. It’s not so much about how much you know it’s how you talk and relate to people.

Nolan said because of Morgan’s encouragement, she is now also considering rural medicine.

“Dr. Morgan has opened my eyes to the opportunities of practicing in a small town, and it’s definitely something I’m considering,” she said. “It’s nice because it’s family oriented.”

“Although (Nolan) is my first student, we have opened the doors to fourth year students and physician residents who are interested in not just primary care but also rural primary care medicine where the family base medicine really takes precedence,” he said. “There is a big shortage of it in America. We need to recruit these young physicians and let them come in and see what its like to be a part of a rural community and practice medicine even if it’s just for a month.

“People need doctors in small towns, and we don’t have enough of them,” he said.