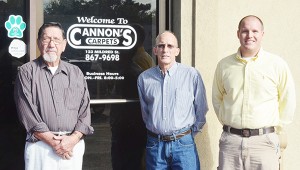 The Cannons – James, Dewayne and Aaron – pose in front of the store.

This year marks 25 years Cannon’s Carpets has been in business. James Cannon opened the doors back in 1990. His son, Dewayne Cannon took over in 1993.

Aaron Cannon, who assumed the position in 2004, now holds the reins and his experience shows the apple hasn’t fallen to far from the tree.

“We originally were located on Highway 31,” Cannon said. “We moved here in 2000. We have been really fortunate.”

Cannon’s Carpets’ founder James Cannon had been doing floor work since the 70s. He worked in Florida for a while, then Dothan. He then decided to go into business for himself and in 1990 opened the doors for the first time. When a part time position turned into full time work at the post office, James Cannon handed over the reins to his son, Dewayne.

Aaron Cannon has been involved in the business since he was a kid.

“I been following dad around this business since I was eight years old,” said Aaron. “In 2004, I came back to the business and have been here ever since.”

At the moment the store has an anniversary sale in full swing.

“Right now we have the Mohawk Anniversary Sale that runs to Oct. 26,” said Cannon. “Carpet, wood and ceramic is all on sale. We got over 200 rolls of carpet and vinyl in stock. We got hardwood in stock. We got ceramic tile in stock in several different sizes and color.”

Though Aaron is at the helm, the generations that came before him are always an inspiration, even as time moves forward. “Granddad is retired, and dad is still involved in the business,” Cannon said.  I’m really thankful for them and what they have done. All the credit goes to them.”

TRM fall to SHS in tourney