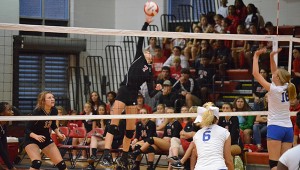 Miller junior Allie Nelson goes up for a hit against Neal Thursday night.

“Tonight was an exciting night for TRM,” Peacock said. “We were in our house against one of our biggest rivals and we were ready to defend it. Everyone stepped up and did just that. “

In the first set Miller jumped out to a comfortable lead early. The Lady Tigers would eventually take the win, 25-12. 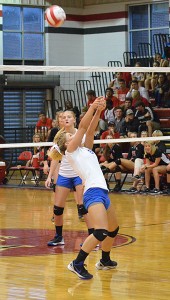 The second set remained close midway through, until Miller gained momentum. The Lady Tigers would take the second set, 25-15.

The third set would prove the closest of the match between the two teams, but Miller would pull out the win, 25-21, winning the set and match.

Neal volleyball coach Jason Blaney says his team was out of sync early and struggled to get back on track. “First time we played Miller we played exceptionally well and today, we just came out flat,” Blaney said. “Miller took us out of our game.  We only had 15 kills on the night and we need to work on 12-15 kills per set. We are playing tough competition and just hoping to keep getting better with every set of every match in preparation for area.”

Leading the Lady Tigers in kills was Steely Ruzic and Allie Nelson . Leading the team in blocks was Taylor Austin.

Miller won the first matchup between the two teams earlier this season.