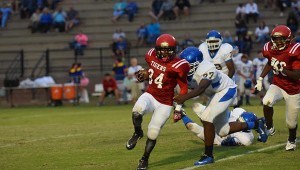 Narkavis Campbell runs in for a Miller touchdown.

After a first quarter that remained scoreless, TRM broke the score column with 15-yard touchdown run by Narkavis Campbell. With the extra point blocked by the Eagles, the Tigers would go up 6-0. WSN would answer back with a 51-yard touchdown run by Amon Craig. The Eagles would succeed on a two point conversion to take the lead 8-6 going into halftime.

After forcing a Miller punt, Neal would start the drive with a 34-yard run into Miller territory. 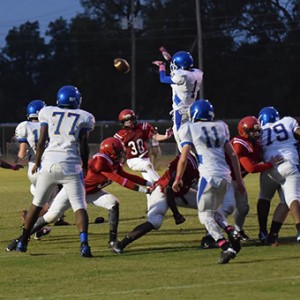 In the fourth quarter with 3:50 left, Neal scored on a 53 yard touchdown pass from quarterback Jennings Hobbs to Amon Craig. The team would fail on its two point conversion attempt after a Miller interception in the endzone.

Miller would lose a fumble on the following kick off return to give the Eagles a chance for a final drive. Miller defense would hold up to force a punt with 1:45 left to play. On third and six TRM’s Bailey would break free for a 57 yard touchdown. The celebration was short lived after the play was called back due to a holding penalty. The game would go to overtime.

In overtime the Eagles got the ball first and scored on a run by Samuel Bosarge. The Eagles opt to go for two points and fail to convert. Miller got the ball next and on fourth and four Bailey took the ball into the endzone. Miller decided for the extra point to win. After a Neal time out to ice the kicker, Miller kicker, Matt Morgan, put the football through the goal posts to bring in a Tiger victory.

This is the second match between the two teams this season. W.S Neal won the first game.

Both teams have one more game on their schedule.

TRM fall to SHS in tourney