A Brewton man is being credited with saving a woman after she crashed on U.S. Hwy. 29 last week.

Taylor White was “riding the roads” with his son, Jayce, when he observed the van pulling a U-Haul leave the roadway and overturn. The vehicle landed on its side in a grove of trees.

“It was really windy out,” White said. “I guess it hit that U-Haul just right and over she went. I pulled her out through the driver’s window, and she and her two dogs were OK.” 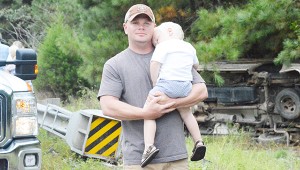 Taylor White holds his son, Jayce, after helping pull a woman to safety following a crash on U.S. Hwy. 29.

The woman, who was not identified, was on her way to her new home in Ocean Springs, Miss., White said.

Responding to the accident were members of the Escambia County Sheriff’s Office and the Ridge Road Volunteer Fire Department. The woman was treated at the scene by D.W. McMillan Hospital emergency personnel.