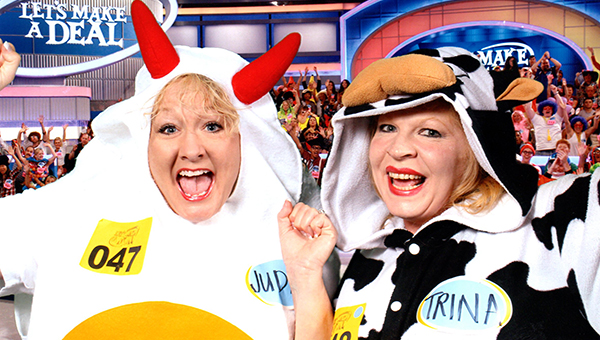 East Brewton’s Judith ‘Jill’ Goolsby and her best friend, Trina Brown Lafferty, in their costumes for ‘Let’s Make a Deal.’ Goolsby’s appearance will air at 2 p.m. today on CBS.

For East Brewton’s Judith “Jill” Goolsby, her suggestion of “let’s take a trip” to her longtime best friend this summer turned into a “Let’s Make a Deal” adventure.

CBS has confirmed that Goolsby will be featured on a 2 p.m. showing today of the hit TV game show where costumed contestants have the opportunities to win big prizes. Filmed in Los Angeles, Calif., the show features actor Wayne Brady as the host.

While Goolsby, a substitute teacher with the Escambia County School System, was sworn to secrecy on how her appearance ended, she said the experience was one of a lifetime.

Goolsby said she and “best friend since the second grade” Trina Brown Lafferty of Texas traveled to visit Lafferty’s daughter, Christian, who is attending college in Los Angeles.

During the week-long trip, the duo enjoyed a number of sights and experiences, but none could top the game show appearance, Goolsby said.

Goolsby said contestants were told the more animated they were, the better chance they had to be selected as contestants.

“Anyone who knows me knows I don’t have any problem making a sight of myself, so when we had to dress up to get a shot at the show, I was all about it,” she said. “I had a deviled egg costume that I’d been saving for 20 years. And I put it to good use that day.”

Goolsby said when Brady called her name, she nearly missed her chance.

“I didn’t hear him,” she said. “He called ‘Judith the Deviled Egg.’ Trinia started beating on me and said, ‘He’s calling you.’

“The way that it works is that you can pick a curtain, big box, envelope or whatever, and it might have $10,000 cash or a prize or a ‘Zonk,’” she said. “You don’t want to get a ‘zonk.’ You answer a question correct and you get what’s in there.”

During the small talk portion of her appearance, Goolsby said she gave a shout-out to her Alabama football team and got into a debate about the college’s best head coach with Brady.”

But as for the outcome of her big day, Goolsby’s lips were sealed.

“The thing is I can’t tell anybody what happened at the show,” she said. “They made me sign my life away. I could tell my husband, but that’s it. You’ll have to watch at 2 p.m. to see what happened.”

The episode will air today, Wed., Oct. 7, at 2 p.m. on any CBS affiliate channel or on local WKRG Channel 5 out of Mobile.