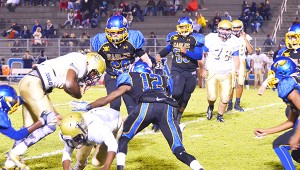 On a misty Friday night the  W.S. Neal Eagles defeated the Monroe County Tigers, 56-20. The win improves the Eagles Region 1 record to 2-1, one win behind UMS-Wright and Thomasville.

“Defensively we did good besides two series. I was proud the way our defense came out in the second half,” he said. “It was very encouraging to see as we move forward in the season ”

The Eagles went to work quickly after receiving the ball first. On the second play of the game the Eagles would crack the score column on a 52-yard run by senior tailback Malcolm Hawthorne. Eagles kicker, Philipp Roger, would add the extra point to put the Eagles up 7-0.

On its second possession of the game the Eagles would score again with a 7 yard run by Hawthorne. The Eagles would add the extra point to increase its lead to 14-0.

With just over four minutes left in the first quarter, Monroe County quarterback, Franklin Banks ran in for 1-yard touchdown run. The Eagles were able to block the Tigers extra point attempt, making the score 14-6. On the following kickoff, the Eagles would mishandle a catch, causing a fumble.

A Monroe County player was quick to recover. The Eagles blunder was costly, putting Monroe County in good field position. The Tigers took advantage of the mistake scoring on a 7-yard scramble by Banks. Monroe County would try for a two-point conversion but failed on the attempt. The score would favor the Eagles, 14-12, going into the second quarter.

With 10:42 left in the second quarter the Eagles would score on a 6-yard run by Quentin Samuel. The team would tag on the extra point to increase the Eagle lead, 21-12. The score would remain so going into halftime. 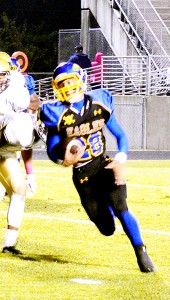 With a little over three minutes to play in the third, Samuel broke for a 70-yard touchdown run, his third touchdown of the night, to increase the Eagle lead to 41-12. With eight seconds left in the quarter, the Eagles would score again with a 31-yard run by Hawthorne. With the added extra point the Eagles extended its lead to 49-12 going into the fourth.

As the Eagles were hitting on all cylinders offensively, things seemed to be going wrong with Monroe County. The Tigers’ quarterback sustained an injury at the beginning of the quarter and was sidelined the rest of the game. The team was unable to move into Eagle territory for the whole quarter.

With under four minutes to go in the fourth, the Eagles added another touchdown with a 3-yard run by freshman, Nathaniel Hutcheson. Monroe County would finally score again with 49 seconds left to play, the team’s first points since the first quarter. Monroe County would convert on a two point attempt bringing the final score to 56-20.

The Eagles will travel to Thomasville this Friday to face the Thomasville Tigers in a Region 1 game matchup. Thomasville is 3-1 in the region. Kick off is at 7 p.m.