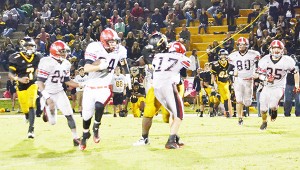 Miller senior defensive back Brooks Brown takes off after an interception Friday night against Opp.

Every team has an identity. Some teams figure theirs out pretty quickly, while for others it may take a while.

From the very beginning of this 2015 football season, T.R. Miller’s football team has found its identity in toughness; particularly on the defensive side of the ball, where in winning six consecutive games the scrappy Tiger defense has yielded only 13 points per game.

So it was fitting that in the biggest game of the year, where a Region 1 championship was on the line, it took a mighty defensive stand in the final seconds of the game to secure a thrilling 27-26 win over a powerful Opp team.

The host Bobcats had overcome an interception late in the game (6:53). Down 27-20 and needing a TD, Opp put together a 20-play, 80-yard drive that culminated with a Ty White TD run of four yards with 12 seconds left on the clock.

But as the Bobcats lined up in the same formation to try and win it with a 2-point conversion, White took the snap, broke the line of scrimmage and was promptly met by seniors Ahmaud Taylor and Markail Mitchell, who stood him up and allowed their teammates to join in on driving White to the ground two yards short of the end zone. That play preserved a victory that personifies what this Tiger team has proven to be, tough and resilient. Better yet, the payoff to success persistence is that, with one more region victory – either over Geneva this week at Homecoming or at Excel in two weeks – T.R. Miller will wrap up its inspiring run to the Region 1 championship and the top seed in the first round of the Class 3A playoffs.

Miller head coach Jamie Riggs says the final play came down to who wanted it most. “We figured Opp would try to run the ball out the gun and they did,” Riggs said..Our lineman absorbed all their blockers. That freed our linebackers. We were able to stand up the runner. The only question once we did that was if he was going to have the force to drive us back or not. More guys came in to help and we were able to stop him about a yard shy of the endzone.”

Riggs says team play has picked up as the season has moved along especially on the defensive side of the ball. “Overall we’re playing as a team,” Riggs said. Defensively, our linebackers have been consistent. We have played a bunch of young defensive lineman that continues to get better as we move along in the season. Our defensive backs have been consistent. We’ve done a pretty good job not giving up the big play. We have changed our scheme at times but I think our linebackers have been really aggressive in their play. “

Opp;’s quick strike offense opened up the scoring early in the second quarter. Set up by a Tiger punt, the Bobcats (4-2, 2-1) utilized runs of 20 and 16 yards to get the ball inside the Tiger 10-yard line, before Orlando Lacey finally cashed in on a fourth-down run of four yards to get the game’s first score. The PAT failed, but Opp led 6-0 with 10:32 remaining in the half.

But the Tigers answered with back-to-back scores to make it 14-6. On the ensuing possession following Opp’s first score, Mitchell sprinted free on the third play of the drive, stiff-armed a would-be tackler and raced down the T.R. Miller sideline before splashing through the rain-drenched end zone for the Tigers’ first TD. Brittain’s first of three PATs made it 7-6. 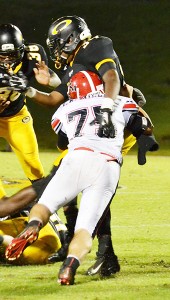 Afterward, Opp got a 55-yard run from Hennis Washington to get ball first-and-goal inside the 10-yard line, but the unbreakable Tiger defense forced an unsuccessful field goal attempt that preserved the small lead, and opened the door for its offense to drive 80 yards before halftime to extend the lead. Mitchell ran for 22 yards on the first play, then followed it up with a 13-yard rumble to get to the Opp 45. On the next play, Tiger junior quarterback Caleb Winton flipped a shovel pass to Michell that gained 25 yards down to the Bobcat 20. Two plays later, on third-and-4 from the 16, Winton (5-for-9, 105 yards) found Chardian Johnson all alone on a post pattern for the touchdown pass with 16 seconds left in the half to give the Tigers the 14-6 lead at the break.

Opp tied the game midway through the third when Lacey connected with a wide open Reggie Thompson on a flat screen that went for 15 yards. A two-point conversion pass made it 14-14. Opp took the lead immediately, when T.R. Miller fumbled the ensuing kickoff and scored three plays later on a 33-yard run. The PAT failed, but the Bobcats had the 20-14 lead.

But, as has been the case all year, when the Tigers needed an answer offensively, Taylor was there to provide it. On the first play following Opp’s score, the senior speedster broke off right tackle and flew 65 yards down the sideline to paydirt, then added the Tigers’ final score with 25 seconds left in the third to make it 27-20 going into the deciding quarter.

The Tigers had a chance to put the game away, when Brooks Brown stepped in front of a Lacey pass and raced inside the 15-line. But a penalty and a fumbled snap led to a fourth down field goal attempt that failed, opening the door for Opp to regain momentum and try to win the game.

Because of the wet and sloppy field, the Bobcats elected to go for two points and the win, but the Tigers’ defensive line blew the play up before it could ever get started. From there, the Tigers handled the final snap of the game, kneeled down and secured the lead in Region 1.

“Opp is an outstanding football team,” Riggs said in conclusion. “They have some of the best individual athletes that we have seen all season. The best thing we did tonight was just to hang in there. Every time it looked like we might open the game up, they stopped us. Anytime we can come in here and sneak out a victory it feels good.”

The Tigers will host region foe Geneva this Friday night for homecoming. Game time is 7 p.m.