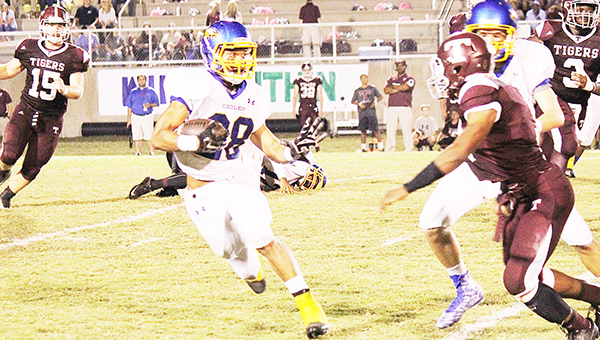 Senior running back Quentin Samuel tries to manuever around a Thomasville defender in Friday night’s game. The Eagles had 313 total yards of offense.

THOMASVILLE– The Neal Eagles suffered a difficult 17-7 region loss to the Thomasville Tigers on the road Friday night. This drops the Eagles to 5-3 overall and 2-2 in region standings.

Penalties made a difference in the game, with Neal on the receiving end of 17 yellow flags, while Thomasville had 10 penalties against them. Head Coach Doug Hoehn said,

“You just can’t have that many penalties and play a team the caliber of Thomasville and give yourself a real good chance of winning,” he said. “There were times we left points on the field. We have to take advantage of all our opportunities when we play a team like that to give ourselves a chance to win.”

The Eagles got off to a strong start, receiving the football first and quickly driving 80 yards down the field in less than three minutes, to end their first possession with a 43-yard touchdown run by sophomore quarterback Jacobey Hawthorne. Junior Phillip Roger’s kick was good, giving the Eagles an early 7-0 lead. 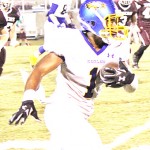 Neal’s defense held strong, and even after Thomasville made three first downs in rapid succession, marching steadily down the field, they were held to only a 15-yard field goal, making the score 7-3 with 6:54 left in the first quarter.

Neal controlled the ball for the rest of the first quarter and into the second, gaining only two first downs, and five penalties. Thomasville had one penalty during this possession. The Eagles made it all the way to the Tiger’s 29 yard line before an interception stopped their hope of another score.

The Eagle defense once again made progress difficult for the Tigers, forcing them to punt, their only first down coming from an Eagle penalty.

Neal took possession on their own 35 yard line and ended an impressive series of rushing and passing plays with a 15-yard pass from J. Hawthorne to senior Troy Lewis in the end zone, but a flag was thrown on the play, calling the ball back out to the 15 yard line, leaving the Eagles at 3rd down and 15. One intentional grounding call later and Neal turned the ball over on downs at Thomasville’s 20-yard line.

The Eagle defense forced a quick three and out, and despite the offense making some big plays, including what looked like a 34-yard touchdown pass from sophomore Marvin Maddox to senior Quentin Samuel that was called incomplete, the Eagles also punted.

To start the third quarter, the Eagles kicked off to the Tigers, and Neal was able to recover the kickoff, but the unusual string of events continued to haunt the Eagles. The Tigers sacked Neal’s quarterback, Hawthorne twice, and then Tiger Hayden Dunn intercepted a pass.

Thomasville was able to convert the turnover into their first touchdown of the night, when quarterback Chad Bryant hit Keeshawn Austin for a 38-yard pass into the end zone. The PAT was good, putting the Tigers up 10-7 over the Eagles with 8:29 on the clock in the third quarter.

On Neal’s next possession, after a long drive, a 28-yard field goal attempt failed, leaving the Tigers up by 3 points.

Thomasville had the ball at the beginning of the fourth quarter, and they took their time driving down the field, using almost half the quarter to finish with a five-yard touchdown run by quarterback Bryant. The extra point was good, giving the Tigers a 17-7 lead, which would be the final score of the game.

On the Eagles’ next possession, they made one first down, then turned the ball over on downs. Immediately, senior Dakota Graves recovered a Tiger fumble, giving Neal another chance to score. They were unable to capitalize on the opportunity, however, and the game ended with Thomasville in possession of the ball on Neal’s 6-yard line but also unable to score again.

Despite this week’s struggle, the Eagles played hard, and should be able to come back strong.

“The kids played hard. We play hard every game. We just didn’t do a real good job with our penalties,” Hoehn said. “We’ve got to come back and play football from here on out. These next few weeks, we’ve got to step it up.

“We’ve got to play hard, and we’ve got to make sure we control our penalties. I think we’ll bounce back.”

Jacobey Hawthorne led the Eagles in rushing with 43 yards and one touchdown on 13 carries.

Neal’s defense held Thomasville to a total of 228 yards of offense, 188 on the ground and 40 in the air.

Next week, Neal plays Satsuma High School at home. Kickoff is at 7 p.m.