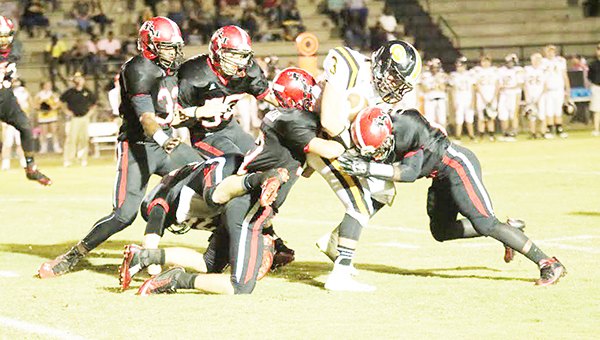 Miller players use teamwork to bring down a Geneva runner in Friday night’s homecoming game. Miller’s defense held Geneva’s offense to 242 total yards in the game.

When the T.R. Miller Tigers decide to rock the black uniforms, it’s usually an opponent’s worst nightmare. And a nightmare it was for the Geneva Panthers as the Tigers won in dominant fashion, 47-13, on its homecoming night.

The Tigers received the ball to start the first quarter. On the first drive, the Tigers came out throwing. Junior quarterback Caleb Winton completed a 30-yard pass to senior wide receiver Chardian Johnson. Next play, Winton connected with senior Markail Mitchell for eight yards. The Tigers would eventually work their way inside Geneva’s five yard  line. Mitchell would punch it in for the score. Kicker Hunter Brittain then added an extra point to give the Tigers the 7-0 lead.

Geneva was unable to get anything going on its first drive. After the force punt by the Tiger’s defense, the offense would put together a three-minute drive, ending with a one-yard quarterback sneak for the touchdown.  With the added extra point by Brittain, the Tigers would go up 14-0.

With five minutes left to go in the second quarter, senior running back Ahmaud Taylor would break free for a 16-yard touchdown run. Brittain added the extra point to make the score 21-0.

On the following drive the Tiger defense would make a big play when Brittain intercepted a pass from Geneva quarterback William Aycock. The Tigers would take advantage of its great field position. Winton and Johnson would hook up for a 12-yard touchdown in the corner of the end zone. With the extra point the Tigers would end the half leading 28-0.

Geneva would receive the ball first in the second half. The Panthers were able to move the chains after a holding penalty on the Tigers, but would be forced to punt with just under 10 minutes to go in the third quarter. 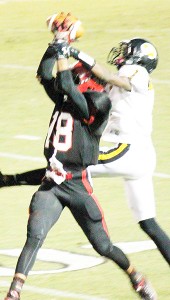 Senior Chardian Johnson snags in a pass near the sideline.

With 7:58 left in the quarter, Winton found an open Taylor in the middle of the field. Taylor would then do the rest with his legs, taking the ball 37-yards for a touchdown. The Tigers failed to score the extra point, leading Geneva 34-0.

However, Taylor wasn’t done with dazzling the crowd as he would score again for the Tigers with an 18-yard run with 3:46 left in the third quarter. Again the Tigers failed to score on the extra point and took the 40-0 lead into the fourth.

With 6:32 left in the fourth quarter, Geneva was able to score on a one-yard power run up the middle by senior running back Jackson Griffin.

On Geneva’s next possession it would get two big runs of 22 yards and 32 yards by sophomore James Williams, the latter run resulting in a touchdown. Geneva would miss the extra point to make the score 47-13.

The Tigers then ran out the clock in its next possession to seal the homecoming victory.

“[Geneva] was tough inside and we thought we needed to attack them on the outside to loosen things up for us on the inside,” Riggs said.

“Earlier in the game we wanted to spread the ball. We made some good catches and were able to make some plays.”

The lone blemish on the Tiger’s win was the team’s nine penalties. Riggs said his team will look to improve on the mistakes.

“It was way to many penalties,” Riggs said. We can’t do that. We got to clean that up.”

Leading the Tigers was Caleb Winton who was 12-17 passing for 228 yards and three total touchdowns.

With the win the Tigers improve to 5-0 in the region and 7-1 overall.

The Tigers will have a bye week next week before traveling to Excel on Oct. 23.