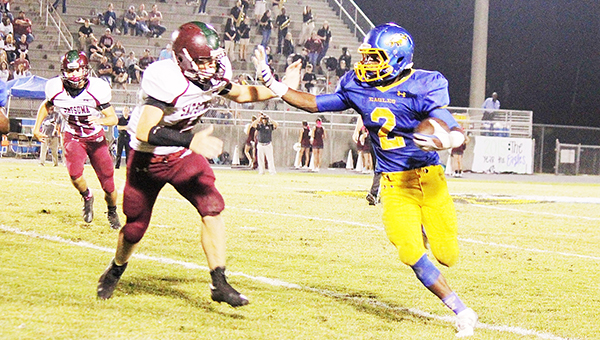 W.S. Neal defeated Satsuma Friday night, 42-21. Above senior runningback Malcolm Hawthorne stiff arms a Gator defender on one of his 11 carries of the night.

The Eagles started the game off early setting the tone with their rushing game. On the first drive Satsuma got a heavy dose of senior running back Quentin Samuel.

Samuel busted out the gates with a 23 yard run on his first carry. Samuel would end the Eagles’ first drive with a nine-yard touchdown run. An extra point added by kicker, Philipp Roger gave Neal a7-0 lead.

While Neal established its ground game early, Satsuma tried to counter with more of an air attack. Facing fourth down, Satsuma opt to go for it, but Neal would for the Gators to turn it over. After one more drive from each team, Neal would remain with the lead at 7-0 at the end of the first quarter.

With 7:45 to go in the second quarter, Satsuma junior quarterback Andrew Barfoot found wide receiver Jared Landrum in the endzone for a 15 -yard pass. Sophomore kicker Grady Mercier added the extra point to tie the game at 7-7.

Neal was quick to answer back when senior runningback Malcolm Hawthorne scored on a nine-yard. With the added extra point, Neal took back the lead 14-0. The Neal defensed forced the Satsuma offense to give the ball back.

With 3:48 to go in the second, Samuel broke free of Satsuma defenders for a 79-yard touchdown. Eagle celebrations were short-lived as Samuel’s touchdown run was called back due to holding. This was only temporary relief for Satsuma because less then a minute later Hawthorne would break free for a 72-yard touchdown. Roger would add the extra point to give the Neal a 21-7.

Satsuma was threatening in Eagle territory before Barfoot would be intercepted by Neal sophomore defensive back Kristian Taylor. Neal would go into half-time with a 21-7 lead. 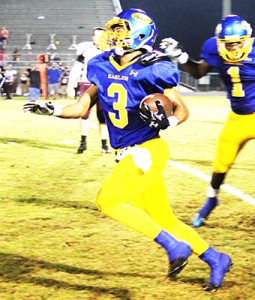 Sophomore Kristian Taylor runs after an interception in the second quarter.

The Neal rushing game continued in the third quarter. With a little over nine minutes to go in the third,  Samuel scored on a 24-yard run. The added extra point extended the Eagle lead 28-7.

With 1:24 left in the third Hawthorne again weaved his way through Satsuma defenders for a 47 yard touchdown run. But another holding penalty would erase another huge run for the Eagles. The third quarter would close with the Eagles threatening inside Satsuma’s 15-yard line.

In little over a minute Hawthorne would break free again for a 72-yard touchdown run, his third touchdown of the night. The extra point was good after the score to make the Eagle lead 42-14.

On the following kick off Satsuma showed they still had some fight in them when freshman Kobe Progue would return the kick inside the Eagle 10-yard line. Junior runningback Blaine Gurley capped of the short possession with a 1-yard touchdown run up the middle.

Neal rushed the ball 42 times for 510 rushing yards on the night. Leading the Eagles offense were Hawthorne with 11 carries for 204 yards and three touchdowns and Samuel with 16 carries for 182 yards and two touchdowns.

W.S. Neal head football coach Doug Hoehn said the rushing game has been there offense’s bread and butter all season and that penalties is something the team will continue to work on moving forward.

“We have ran the ball well all year long,” Hoehn said. “Last week penalties absolutely killed us. This week we improved a lot but we still had a couple.

“We had two touchdowns called back, so we have to have mental discipline and focus for that not to happen,” he said. “Our focus is to try to get better as a team every week and that means getting better with penalties also

The defense was able to hold Satsuma’s offense to 260 total yards. Hoehn said the defense knew what they were up against and moving ahead they’ll work on improving on the mistakes.

“Defensively they got us on two rub routes,” Hoehn said. “We knew they were going to do that going into the game. We’ll talk about it this week and try to get better against Southside Selma.”

With the win the Eagles improve to 6-2 overall and 3-2 in the region. Next week Neal will travel to Southside Selma in a region game matchup. Kick off is at 7.

Prior to the game, W.S. Neal inducted 1984 graduate Scott Fountain into its Class of 2016 Hall of Fame. Fountain lettered in baseball and football while attending W.S. Neal. He has gone on to coach at Central Florida, Iowa State, Georgia Southern and Florida State. He is currently an assistant coach at Auburn University. 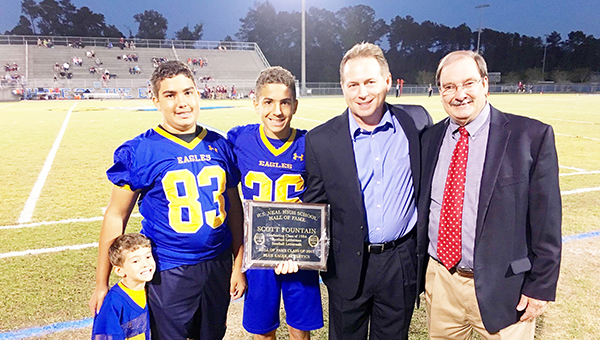 Scott Fountain, a 1984 WSN graduate and current assistant coach at Auburn University, was inducted into the school’s hall of fame. He is pictured with his family and superintendent John Knott.