Golden to be inducted into Country Music HOF 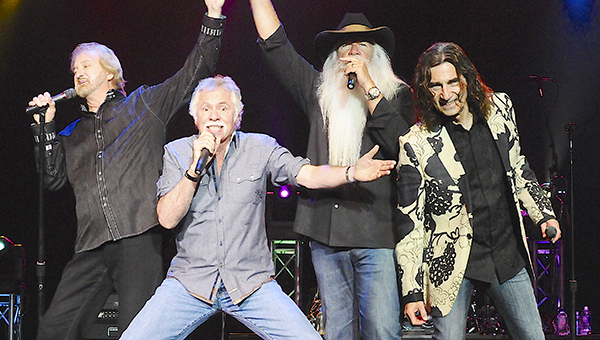 The Oak Ridge Boys will be inducted on Sunday into the Country Music Hall of Fame.

Sunday is a day more than six decades in the making as the Oak Ridge Boys – and Brewton native William Lee Golden – is inducted into the Country Music Hall of Fame.

The Oak Ridge Boys are known worldwide as one of recording history’s most extraordinary musical successes – having charted single after single and album after album, and celebrating more than 41 million records sold, two double-platinum albums, and more than 30 Top 10 hits, including No. 1 chart-toppers, “Elvira,” “Bobbie Sue,” “Thank God For Kids,” “American Made,” among dozens more.

Golden, as one of the members, got his start standing in front of a battery-powered radio on a farm south of Brewton.

“One of my earliest memories is from when I was about 6,” Golden said. “We didn’t have electricity, but we had family.  We’d gather around that radio on Saturday night and it would bring in the Grand Ole Opry. It was like you were transported there. You could see it in your mind, the music was so vivid.

“As a small child, to me, that was impressionable,” he said.

Along with his sister, Lanette, and later, younger brother Ronnie, Golden would take his talent into the church. From there, to his “Granddaddy Golden’s” radio show on WEBJ. As a member of the W.S. Neal High School chorus and FFA chorus, Golden used the time to hone his skill as a singer. After graduation and a brief stint at the Georgia Pacific paper mill in Brewton and “singing on the weekends,” he made the connection to what would become the Oak Ridge Boys. It changed his life forever, he said.

“That was in 1964,” he said. “They invited me to join in 1965. Even now, with our success, I don’t think that I’ve made it. I feel like (the induction) is a tremendous milestone in our lives. It’s certainly one of the highest recognitions of achievement that can be given in the country music world because it’s given out by your peers.

“When standing in the rotunda, seeing all of these plaques of different people who are in the hall of fame, and I think, ‘These people stirred my heart and my earliest memories at home on the farm,’ it’s humbling,” he said. “We are so honored.”

Golden makes his home in Nashville. He’s recently remarried, and when not doing music, he explores art and photography.  The group travels approximately 160 concert dates a year, and there are no plans to slow down, he said.

“We’ve been blessed that we have had continued success,” Golden said of the group, which is only one of seven to also be inducted in both the county music and gospel halls of fame.

“If you do what you love to do, it never seems like to work in your life,” he said. “But there’s always something to do if you’re pushing to grow. My advice to those out there is seek your visions and follow those visions and dreams.

“Don’t set them aside,” he said. “If you do, you quit. It’s easy to get sidetracked and pulled in different directions than the one you personally want to take. It’s important to continue to never, ever stop.

“If you think you made it, you quit growing,” he said. “ If you can’t learn something every day, then you’re not out there seeking to learn and grow.”

In the future, visitors will be able to see Golden’s buck skin jackets as well as other items of Oak Ridge Boy memorabilia.

Also set to be inducted are Grady Martin and Jim Ed and The Browns.