We’re in this now, together 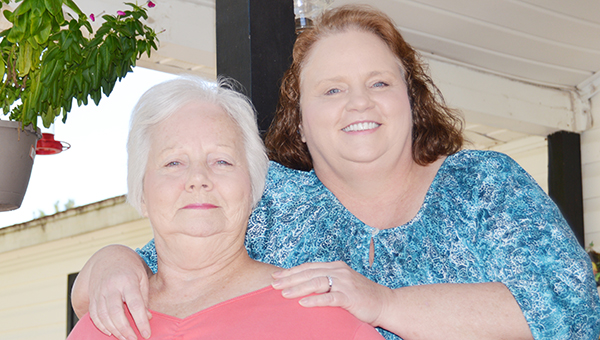 Appleton residents Faye Jackson and her daughter, Shirley Jackson Miller, on the front porch of their home. Both are breast cancer survivors.

The two may be recognized from their time at D.W. McMillan Hospital, where they both worked in the outpatient registration departments.

Miller was diagnosed in 2007 after finding a small lump in her right breast. Luckily, she had a regularly scheduled doctor’s appointment the next day. A mammogram led to a biopsy, which led the realization she had stage II breast cancer.

“It was scary to say the least, but you learn to put your faith in God,” Miller said.

After the removal of all of her lymph nodes, she underwent three rounds of chemo and 36 radiation treatments. But as of Dec. 23, 2007, she was cancer free.

“Talk about a ‘Merry Christmas’ to me,” she said.

In those months, it was difficult but Miller said she managed to keep good spirits.

“I lost my hair, and I think that was the hardest thing,” she said. “My mom sat on my front porch and shaved my head. I cried; she cried. But we got through it all.”

For six years, the family breathed easy. That ended in 2013 when a mammogram revealed the tell-tell mass in Jackson’s breast.

Compared to her daughter’s treatment, Jackson said she had it easy.

A few months later and Jackson was cancer-free.

Their family is no stranger to breast cancer. Jackson’s mother was diagnosed at 66 and her sister in 2007 – one month after her daughter received the news.

“But we all made it,” Miller said. “You can beat cancer. You have to make sure you receive your annual check ups, and always – I mean always – keep a positive attitude. Keep your head up.

“Without God and my family, I wouldn’t have made it,” she said.