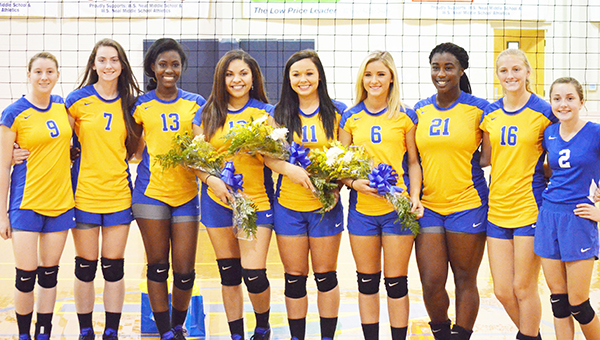 On a night that honored its seniors, the W.S. Neal volleyball team was able to sweep Atmore at home.

In the first set of game one of a best-of-three double header, the varsity team got off to a hot start. The Lady Eagles would score five unanswered points to take a 7-2 lead early. Senior Alyssa English would send a spike over the net past Atmore defenders to culminate a 5-0 run for Neal to bring the score to 23-13. Atmore would add to their total but fall short. The set would close out with Neal taking the win, 25-14.

In the second set, Neal senior Karissa Johnson would get the team going with a kill over the net to go up 1-0.  Johnson would add two more kill shots in the set with the latter giving the Lady Eagles an 11-7 lead. Neal would score eight unanswered points to go up 19-10.  Neal would hold on to the lead to win the set 25-14, and the first game. 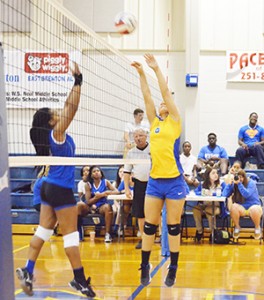 Senior Madison Winchester returns the ball over the net against Atmore.

In game two the Lady Eagles didn’t lose any steam. Junior Dinah Samuel started the set with a kill to give the team the lead. Samuel would have three kills in the set. Marishia Fraser added a kill in the set. With Neal leading 23-11, sophomore Erin Salter would make a hustle play to keep the ball in play in which Neal would eventually win the point. Neal would take the set, 25-11.

Game two would prove the closest match of evening. After a quick start by Neal, Atmore fought their way back to draw the score even at 11-11. Neal would go on a 6-0 run at that point to take the lead, 17-11.  Atmore would push for a late run, but kills by Neal’s Fraser and Johnson would stifle their momentum. The Lady Eagles would win the set, 25-21, and game two.

W.S. Neal volleyball coach Jason Blaney likes the way his team competed in the double header. “We played extremely well against a well coached Atmore team,” Blaney said. “Though our overall record may not show it, we have fought hard all season and have just came up short in numerous matches.  This was a great week for us heading into the area tournament next Tuesday.”