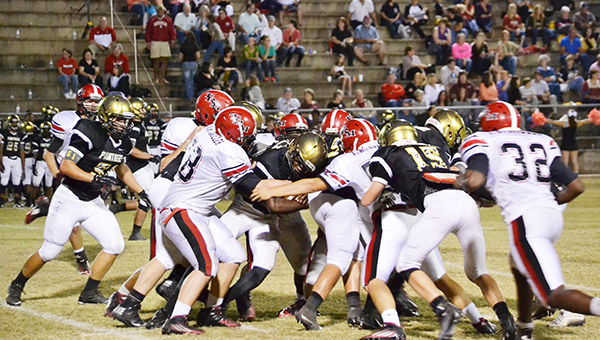 A host of TRM Tigers wrap up an Excel Panther Friday.

The T.R. Miller Tigers cruised past the Excel Panthers 42-6 in its final region game of the season.

The Tigers started the game off with a bang when senior Chardian Johnson lined up at quarterback and took off on a designed quarterback run for a gain of  23 yards.

On the same drive junior quarterback Caleb Winton would hook up with Johnson on a 30 yard pass. With 2:20 left in the first, 194-pound senior tailback Markail Mitchell would punch in the first score of the game with a 4-yard touchdown run. Junior Hunter Brittain tacked on the extra point for the Tigers to make the score 7-0.

On their first play on offense, after forcing the Panthers to give up the ball on the Tigers 34-yard line, Winton connected with Johnson down the sideline for a 66-yard touchdown pass. Brittain added the extra point to end the first quarter with the Tigers leading 14-0.

In the second quarter, the Tiger defense was able to keep the Excel offense in check. Meanwhile the Tiger offense kept rolling. With 6:32 left to play in the second, sophomore Michael Campbell broke for a 26-yard touchdown. The added extra point increased the Tiger lead, 21-0.

A little over three minutes later, the Tigers would run a trick play on a reverse. With Johnson lined up as a receiver he moved in motion to receive a toss by the halfback. Johnson would do the rest with his legs blowing by Panther defenders for a 31-yard touchdown run. The added extra point extended the Tiger lead, 28-0. With 24 secs left the Tigers attempted a 44 yard field goal. The field goal try would miss. The half would close with the Tigers leading Excel 28-0.

Late in the third, on a play with years in the making, Winton would connect with brother, junior Joshua Winton for a 14-yard touchdown. With the touchdown the Tigers scored six unanswered touchdowns. Brittain added the extra point to make the score 42-0. With 2:10 left in the third, Excel was finally able to get on the board when junior Antonio Lett broke for a touchdown on a 42-yard run. Excel would miss the extra point to make the score 42-6.

Both defenses held their opponent’s offenses in check in the fourth. The Tigers ran out the clock’s final seconds to seal the win, 42-6. 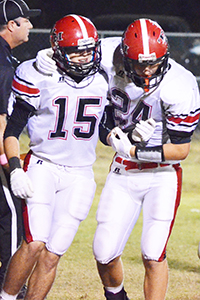 “Excel did a couple things that caused us some problems early but we got adjusted to them,” Riggs said. “At the time we were just a little over aggressive. I thought we did a good job handling the option style offense they run.”

In the game the Tigers offense accumulated 435 total yards. Of the total, 357 yards was in the first half. Riggs says the big plays allowed the Tigers to set the tone early.

“The big thing we did tonight was making the big plays on offense to put some points on the board,” Riggs said. “We need those big chunks of yardage in our offense. I thought we did a good job throwing the ball, particularly in the first half, to get those big plays.”

Leading the Tigers was Chardian Johnson with 231 all-purpose yards and two touchdowns, one receiving and one rushing.

With the win, the Tigers improve to 8-1. Next week the Tigers travel across the creek to play rival W.S. Neal in the Battle of Murder Creek. Kickoff is at 7 p.m.