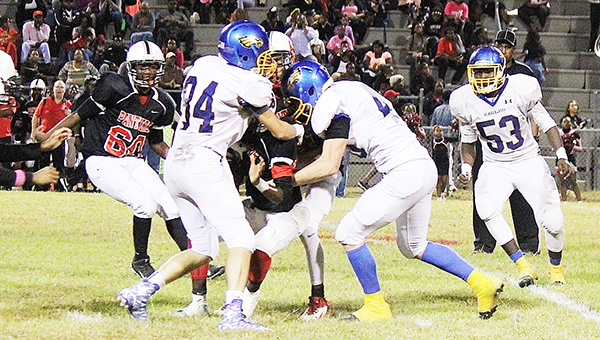 Eagles make a play on a Panther runner in Friday’s game at Southside Selma.

“A positive is that the kids didn’t quit,” Hoehn said. “They found a way to win. Southside Selma was ready to play tonight, and they played hard.

“The kids didn’t lie down,” he said. “A game like that, you’ve got to keep playing or else you’re going to lose the game. Often that’s a credit to some of our seniors leadership.”

The Panthers kicked off to the Eagles to begin the game, and Neal used three and a half minutes to march down the field for a touchdown, earned on a 26-yard run by senior Quentin Samuel. Junior Phillip Roger’s kick was good, giving Neal an early 7-0 lead.

Soon, senior Dakota Graves intercepted a pass intended for a Southside receiver, giving Neal possession on their own 45-yard line. Six plays later, senior Malcolm Hawthorne rushed 35 yards for a score. Roger’s kick was good, giving the Eagles a 14-0 lead with 2:37 left in the first quarter.

The Panthers took possession of the ball on their own 37-yard-line, moving down the field quickly, and in just over a minute and a half, they were celebrating their first touchdown, a 5-yard run on a quarterback keeper. They faked the kick and completed a pass for two points, so with 59 seconds left in the first quarter, the score was Neal 14, Southside 8. 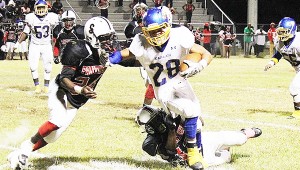 After a back-and-forth battle from the field to the scoreboard, the Eagles headed into the locker room with a 28-20 lead at halftime.

A 13-yard touchdown run by sophomore Jacobey Hawthorne and a good PAT by Roger put the Eagles up 35-20 with 9:20 on the clock in the third quarter.

And again, it was back and forth between the teams throiughout the next two quarters until the Panthers scored on a 18-yard run by their quarterback with 4:17 left on the clock. This decreased Neal’s lead to 56-42, which was the final score of the game.

Phillip Roger was a perfect 8 for 8 on PATs.

Neal’s defense struggled all night. Coach Hoehn said, “Offensively we were doing fine all game long, but defensively we gave up some big plays, third and long, fourth and long. We gave up big plays. The kids found a way to win. Am I satisfied with our execution, especially on defense? No, no, no.”

When asked what the defense had to do to improve for next week, he said simply, “Play. Just be focused, and play.”

Graves led the Eagle defense with four tackles, one forced fumble, and one fumble recovery.