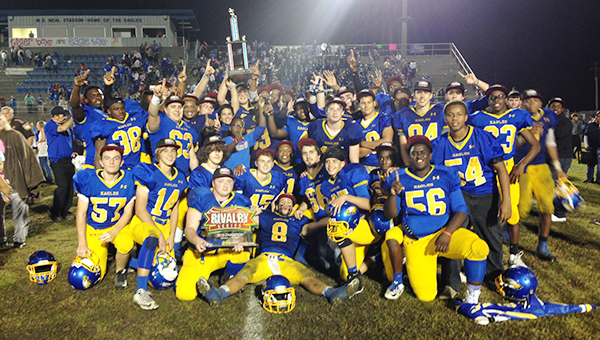 In a battle that lived up to its coined name, the W.S Neal Eagles defeated the T.R. Miller Tigers 26-17.

After the win WSN head coach Doug Hoehn expressed how proud he was of his team.

“[Miller] had a really good game plan up front with their front seven,” Hoehn said. “We went in at half time and changed a couple things up front as far as blocking and that helped us. I think we had more consistency running the ball the second half.

“Our kids played really hard, and I’m so proud of them,” he said. “I’m very proud of T.R. Miller. Those kids played so hard. They’re a great football team that was ready to play. I think both teams played their best games tonight.”

The Eagles received the ball first and began its offense on their own 36-yard line. On the first play, senior tailback Quentin Samuel slipped past Tiger defenders for a 61- yard run. On the next play, the other senior tailback of the duo backfield, Malcolm Hawthorne, rushed in for a 3-yard touchdown. The Eagles would fail to score the extra point due to a botched snap. After a drive that took less than 30 seconds, the Eagles were up 6-0. 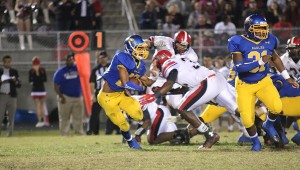 After the kickoff, the Tigers began their offense on their own 38-yard line. The Tigers would pick up a quick first down when junior quarterback Caleb Winton hooked up with fellow junior JoJo Booker on a 16-yard pass. After the Tiger’s picked up a couple first downs with its running game, the Eagles were finally able to get a stop on third down to force a field goal attempt. Tiger kicker Hunter Brittain drilled a 32 yard field goal to close the Neal gap, 6-3.

On the Eagles second drive of the game Samuel would break free again after a tremendous effort for a 75 yard touchdown run. Eagle celebrations were short lived when the huge run was erased due to a holding penalty. The Tigers would force the Eagle offense to punt.

On their second drive of the game, the Tigers would turnover the ball on a fumble, setting up the Eagle’s offense on the 50-yard line. The fumble would prove costly for the Tigers, which resulted in a 11-yard run up the middle for Hawthorne. WSN junior kicker Philipp Roger added the extra point to extend the Neal’s lead, 13-3.

With 7:41 left to go in the second quarter, senior tailback Ahmaud Taylor escaped Neal defenders for a 40-yard touchdown run. Brittain added the extra point to draw the Tigers closer, 13-10.

On the following kickoff Neal’s Samuel received the ball and took the pigskin for a 60-yard run. Again one of Samuel’s big  runs was called back due to penalty. The score would remain with Neal leading 13-10 going into the second half.

The score would remain tied until three minutes remained in the third when Tiger senior tailback Markail Mitchell barreled in the endzone for a five yard run. The Tiger extra point was good, giving the team their first lead of the night at 17-13. 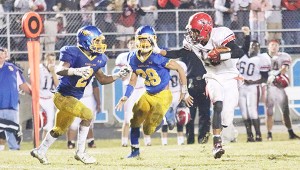 On their next drive the Eagles were able to keep the chains moving forward via big runs by Hawthorne. Hawthorne picked up three first downs on runs of 15, 16 and nine yards. He capped off the drive with a 6-yard touchdown run that put the Eagles back on top. With the added extra point the Eagles led 20-17 with 11:12 left to go in the fourth quarter.

Having to keep pace the Tiger’s offense began their drive on their own 34-yard line. The Tigers would pick up a first down on a run by Mitchell. Facing 3rd and 10, Winton dropped back and found senior Chardian Johnson for a 15-yard catch, one of his four catches of the night. Later in the drive a  penalty would push back the Tigers. With the clock not in the Tigers favor, Winton would air the ball deep for a receiver down field but have the pass intercepted by Neal’s Hawthorne.

On the following drive by the Eagle offense, the Tiger’s would force the Eagles to punt after a drop pass by Neal senior Troy Lewis. Catching the Tigers off guard, Neal punter and starting quarterback Jacobey Hawthorne rolled to his right and  found a wide-open Lewis down the seam of the field.

Lewis would do the rest with his legs, taking the ball in for a 36-yard touchdown. Neal would fail on the extra point after Roger’s kick would travel and hit the upright post. Neal extended its lead 26-17.

A play that was a game changer was the fake punt by Neal on fourth down. Hoehn says the call was made for the right moment.

“We ran a pass play before where we had a guy open and we dropped the football. We rolled with [Jacobey] and any opposing team has to honor that or else we can throw on either side he rolls or he has the option to run. We practice it.

“We practice it all the time.I thought we would have a player open down the seam. He was. I felt we needed a pick me up at that time of the game and our kids responded to the call. Any call like that is a gamble. If it doesn’t go your way you’re not very popular. If it goes your way it’s a great call. The kids executed it and they deserve all the credit.”

T.R. Miller head coach Jamie Riggs says despite the loss he is proud of his team.

“(Neal) made some big plays on us in the second half; especially on the punt. That’s my fault,” he said. “I got to do a better job of getting us lined up. You deserve the victory when you make as many plays as they did. I’m proud of our bunch. We played hard. We just didn’t get the job done tonight.” 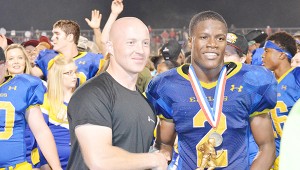 “First off I got to give the honor to God,” Hawthorne said. “Also I got to give thanks to my offensive line. You never want to lose to Miller in your senior year. It feels great to go out with a bang.”

Hawthorne had 18 carries for 99 yards and three touchdowns. On the defensive side he came up with a big interception late in the 4th quarter.

Leading the Tigers was Ahmaud Taylor with 23 carries for 153 yards and a touchdown.

WSN finishes the season 8-2. The Eagles will travel to play the Munford Lions(7-3) in the first round of the playoffs this Friday. Kickoff is at 7 p.m. at Munford Stadium.

TRM finishes the season 8-2. In the first round of the playoffs, the Tigers will face the Central Coosa Cougars (5-5) at home this Friday. Kickoff is at 7 p.m.