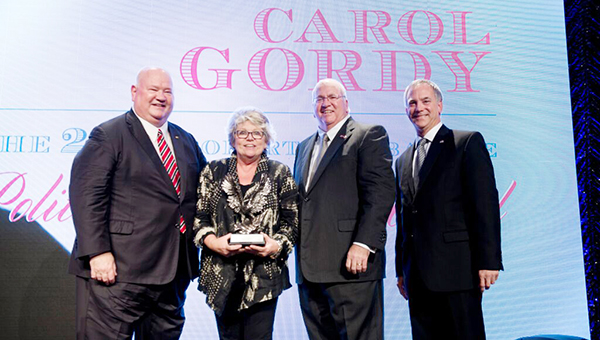 Brewton’s Carol Gordy was honored in October by the Business Council of Alabama with its “Robert ‘Bubba’ Lee Political Courage Award.”

Named for the former BCA chairman, the award honored Gordy as “someone who is willing to take a position that’s right, no matter the cost,” said BCA chairman Marty Abroms.

In Brewton, the name “Gordy” is synonymous with creative talent and strong business sense as the family worked to build the Natural Decorations Inc. (NDI) company and brand. For nearly 50 years, NDI has been the premier manufacturer of the finest floral and botanical reproductions in the world. All its designs are custom, made to order, at the factory in Brewton. Sold in the storefront on Belleville, the creations are a sight to behold, many agree.

And are Gordy’s contributions to the state’s business community, BCA officials and others said.

“Gordy is a distinguished member of the Brewton business community and was BCA chair eight years ago,” Abroms said. “ She was instrumental in charting a new course for ProgressPAC that set the stage for the business community’s unprecedented success in the 2010 and 2014 election cycles.”

State Rep. Alan Baker (R-Brewton) was in attendance of the crowd, which numbered more than 2,000 from across Alabama.

“Being from Brewton and personally knowing Carol and all of her significant accomplishments to the community, region and state, I beamed with pride as she was escorted across the stage,” Baker said.

“Many are unaware of this special ‘gem’ in our midst who has been recognized at various statewide and nationally prominent events,” he said. “Beyond her role as president and CEO of NDI, many local citizens are completely unaware of her many accolades, such as serving as a judge at the Tournament of Roses Parade, her past serves as the first and only female BCA chair and now, most recently, the BCA Courage Award winner.

“She is an asset to this community, as she and her husband, Joe, have done so much to uplift our community and this region,” he said.

And as part of the Gordy family’s continued support of Brewton, Mr. Gordy will be honored Thursday for his donation of the “Joe Gordy Ornamental Horticultural Library Collection” at the Brewton Public Library. A reception is set for 5:30 p.m. at the BPL. The public is invited to attend.

County to participate in state celebration