Eagles to Lions fall in first playoff round 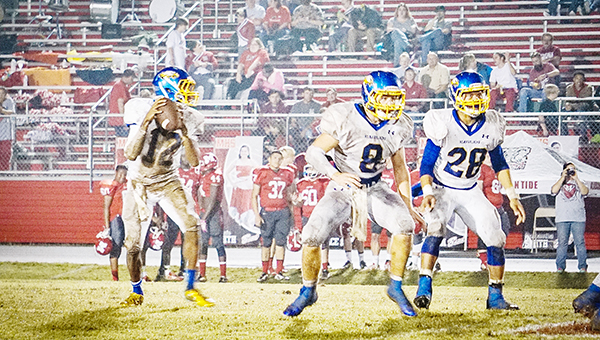 MUNFORD- A heartbreaking 20-0 loss to the Munford Lions in the first round of state playoffs marked the end of the W.S. Neal Eagle season.

The Eagles finished the season 8-3 overall and 4-2 in the region.

Head coach Doug Hoehn was heard telling players that the scoreboard at the end of the night was just that – a number.

“It just wasn’t our night, and it had nothing to do with lack of effort or our character,” Hoehn said. “Things didn’t go our way, but it wasn’t because of a lack of effort or attitude. It’s just one of those nights.”

The rain-saturated field was the site of a defensive battleground throughout the night.

The Lions received the ball, taking possession on their own 35-yard line. While they had a promising drive, making three first downs to Neal’s 15-yard line, the Eagle defense proved too strong, and Munford turned the ball over on downs.

On their first possession, Neal was able to gain one first down before having to punt the ball away, giving Munford good field position at Neal’s 48-yard line. Six plays later, junior quarterback Avery Harris ran in a nine-yard touchdown with 3:43 left to play in the first quarter. The PAT was good, giving Munford a 7-0 lead. This would be the only score either defense would allow in the first half of the game.

Neal received the kickoff to start the second half, but despite a good start, with J. Hawthorne completing a 22-yard pass to Graves and a 6-yard pass to senior Dalton Shell, the wet weather conditions led to a fumble that was recovered by Munford on their own 35-yard line.

The Lions were able to convert this turnover into points, scoring nine plays later on a six-yard touchdown run by senior Charles Smith. The PAT was knocked down, so the Lions increased their lead to 13-0 with 6:06 left in the third quarter.

While Neal’s next possession was turned over on downs, the Eagles earned another chance as senior Quentin Samuel intercepted a pass thrown by Munford’s Harris; however, the Eagles were unable to turn this possession into points.

Neal would punt twice more, and the Lions would punt once more before Munford could get close enough to the end zone for Smith to make a 4-yard touchdown run. The PAT was good, and Munford’s lead increased to 20-0 with 8:23 left to play in the game. This would be the last time either team would score for the night though both teams would hold the ball two more times. Each teams’ defense would stand strong.

Hoehn credited depth on the Munford team as a contributing factor to the Lions win.

“They had no one that played both ways,” he said. “They had no one even on special teams that played offense or defense, so they were able to stay a lot fresher. The first half was much better than the second half. I think a lot of that has to do with, just their numbers.”

Reflecting on the year, Hoehn said he and his fellow coaches were proud of this team and what they’ve accomplished.

“The kids had a great year this year,” Hoehn said. “They finished 8-2, 8-3 after (Friday), made the playoffs, finished No. 9 in the Alabama Sportswriter’s Poll, were No. 6 in the MaxPreps Poll, broke the school record for region wins, won the Battle of Murder Creek. We’re proud of them. We’re very proud of them.

The Eagles had 128 total yards of offense in the game: 51 rushing and 77 passing.