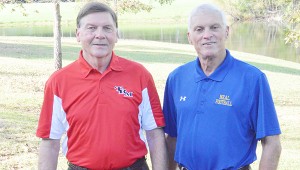 “It’s a great honor, and I’m flattered,” Sasser said. “I’m sure there are quite a few others that went to Miller that are more worthy than me, but I’m flattered by the honor, and I appreciate it greatly.”

“The school can only induct one guy for the rivalry, so I’m more or less a recipient for all the players, students and fans who have ever been a part of this game,” Wall said. “That’s my take of it, and I feel very honored and humbled to accept this award for W.S. Neal.”

In 1964 Sasser led TRM to an 8-1-1 season – the team’s best in 13 years. He was a unanimous 1st Team All-State selection. After high school he attended the University of Alabama where he played safety and kick returner for the Crimson Tide.

After college he entered coaching, beginning at Mountain Brook under his former head coach at TRM, Darryl Fitts, as a defensive backfield coach for three years, then Vestavia for three years. At the age of 27, he accepted his first head-coaching job at Brantley going 51-8-1 in five years.

After a stint at Florala and Monroe County, he eventually became head coach of T.R. Miller. While at his alma mater he was 49-22. He would lead the Tigers to a win for the 1984 4A State Championship. He would retire from coaching in 1986.

While at WSN, Wall was a three-year letterman in both baseball and football. He played both offense and defense in three consecutive football victories over TRM. He graduated in 1966 as class Valedictorian. After graduating from high school, he attended Marion Military Institute for one year before entering the United States Military Academy at West Point, N.Y. While there he played football and was the quarterback of the 1969 Army football team that defeated archrival Navy, 27-0. Upon graduation he was commissioned as a Second Lieutenant in the U.S. Army and then served on active duty in a variety of positions for 21 years, including three years as an assistant football coach for Army. He retired from the military in 1992.

The pairing of Sasser and Wall is not the first between the two.

As players, Wall and Sasser faced off multiple times in the rivalry between Miller and Neal including a rain drenched game in 1964 at the Old Rotary Field. It would be the last time the game would be hosted at the field. WSN would win 7-0.

Sasser recalled the game and his matchups against Neal as a player, coach and parent.

“It started out a beautiful night, then the rain came at half time and the field was flooded,” he said. “It must of rained four inches the second half of that ball game. I don’t remember much of that game because I had a got a concussion on a kickoff. I didn’t play the second half. I didn’t have a lot of success against W.S. Neal as a player. I had some success as a coach. And then when my sons were playing they went undefeated against Neal.”

Wall was the quarterback and directed the second half drive in the Neal win.

“In the second half it rained harder than I have ever seen it rain before,” he said. “The field was covered in water. Mike didn’t play the second half because of a concussion. He was the best player on Miller’s team. I don’t know if it would of made a difference, but any time a key player gets hurt it affects the way a team plays.”

Wall would go undefeated in his high school career against Miller. In 1966, the football season after Wall graduated, Miller would win 25-14.

Wall’s wife, Anita, went to T.R. Miller and was a senior that year. Wall says she reminds him about the Miller win.

Sasser and Wall were chosen by the coaches’ committee of each respected school to be inducted into the Great American Rivalry Series Hall of Fame.