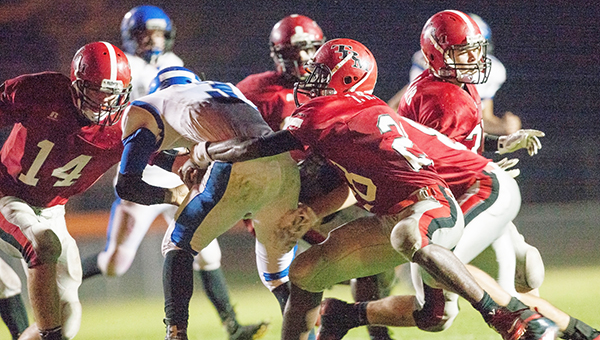 In the first round of the Class 3A state playoffs, the T.R. Miller Tigers dominated the Central Coosa Cougars 67-16.

The Tigers defense held the Cougar offense to 264 total yards for the game. TRM head coach Jamie Riggs likes what he saw out of his team in the first round.

“I thought we had a good plan going in and the players executed,” Riggs said. “(Central Coosa) caused us some offensive problems early. They were giving us a different look on defense early but our coaches did a good job with making adjustments and made things happen. I’m proud of our bunch. We did what we needed to do. We were coming off a tough lost last week and I thought we did a nice job getting ourselves back ready to go.”

Central Coosa received the ball first to begin the game. After the kickoff the Cougars would begin its offense on their 28-yard line. Unable to get into any rhythm, the Cougars would have to punt on its first drive. TRM began their offensive night with a 43-yard run by senior Ahmaud Taylor. Taylor would cap off the same drive with a one-yard touchdown run.  Tiger kicker Hunter Brittain added the extra point to give the Tigers the lead 7-0.  The score would remain so going into the second quarter.

With 8:33 left in the second quarter senior Tamerick Jenkins pounded in a 3-yard run for the touchdown. On the extra point attempt Central Coosa would commit an off sides penalty. After the penalty the Tigers elected to go for a two-point conversion instead and would succeed courtesy of a run up the middle by Taylor to extend the Tiger lead 15-0. Central Coosa would answer the call in a hurry. With 5:47 to go in the second, Cougar junior quarterback Raymond Graham would take the pigskin in the end zone  for a one-yard touchdown. The Cougars decided to go for two points. The decision would prove successful, with a run by senior running back Rodriquez Whetstone to dwindle the Tiger lead, 15-8.

On the Tiger’s next drive, on 2nd down, Winton would find fellow junior, JoJo Booker, for a 60-yard touchdown catch. Brittain added the extra point to extend the Tiger lead, 22-8.

With a little of two minutes to go in the second, the Tigers were able to get the ball back after an interception by Johnson. The interception would prove costly for the Cougars. On the ensuing drive the Tiger offense would score, via a 28 yard run by Taylor. With the added extra point the Tigers now led, 28-8. The Tigers offense was not done. With 33 seconds left in the half, Winton would find a wide open Johnson on the side line. After a quick juke move to dodge a Cougar defender, Johnson would score for an 8-yard touchdown. The Tigers would miss the extra point and go into the locker room with the lead, 35-8.

The Tigers came out in the third quarter with full force. On the kickoff  to begin the third the ball would land in Johnson’s hands. Johnson would put the jets in motion, taking the ball to the end zone for an 80-yard touchdown. Brittain would miss the extra point to make the score, 41-8.

However, the Tiger offense wasn’t done in the third. With 9:50 to go in the quarter, Winton would fine Jenkins with a 10-yard pass for the touchdown. A botched extra point would make the score 47-8.

Less than 30 seconds later after scoring, the Tigers offense would take advantage of another blunder by the Cougar offense, that culminated with a 10-yard run by Taylor. Again the Tiger’s missed the extra point making the score 54-8.

With 5:40 to go in the third, Tiger sophomore running back Demarquis McMillan got in on the scoring spree with a 12-yard touchdown run of his own. The score would make seven unanswered touchdowns by the Tigers. Another botched extra point would make the score, 60-8.

The Cougars would finally stop the bleeding with 2:15 left to play in the third when Graham would find 6’4” junior wide receiver David McKinney for a 31-yard touchdown catch in the end zone. The Cougars succeeded on a two-point conversion to close the Tiger gap, 60-16.

In the fourth quarter the Tigers would score on a 20-yard run by senior Kishan Patel to put the exclamation point on the game. The Tigers added the extra point to pad the Tiger lead, 67-16.

Riggs said getting ahead really set the tempo for his team in the game.

“(Central Coosa) did some things early that caused us some problems because they are really skilled,” he said. “I thought we were able to make some big plays on offense and get some points on the board that made things a little bit better for us.

“(Central Coosa) did some nice things tonight and I know they’re trying to build a program. They are going to be a good football team.”

The TRM offense faced a third down situation only one time, which came on the Tigers first drive of the game.

After the game, Winton and Taylor eclipsed milestones for the season. Winton has passed for 1,560 yards and 12 touchdowns. Taylor has rushed for 1,094 yards and 13 touchdowns.