XC on to state 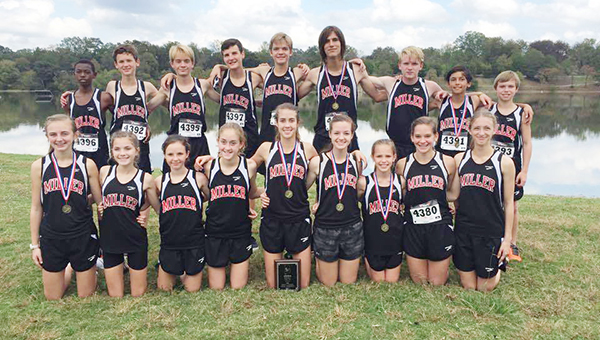 Members of the TRM XC team pose after the day’s win.

The TRM girl’s team exceeded expectations of a fourth place win out of six teams to earn a first place finish while the boy’s team finished third.

Both will represent Miller at the 3-A state meet in Cullman Saturday. The feat is a first for the boy’s team in many years, Coach Rob Atkinson said.

“I couldn’t be prouder of our teams’ performances,” he said. “Everyone gave a great effort. I wasn’t too concerned about the times since everyone ran the race as had as they could and we came out on top.

“The girls were ranked fourth but ended up winning the section,” he said. “This will be the eighth year in a row we’ve had a girls team at state.”

The TRM boys team overcame a tremendous jump to place in the day’s race – a feat Atkinson said was indescribable.

“This boys team is probably the best one we’ve had since I’ve been here,” Atkinson said. “They had to come over 30 points in a five-team race to rank, which is unheard of. I’m not sure that I have the words to describe what they did.

“Those boys laid everything on the line and came up with a third place win,” he said. “When you look and see that there was only six-point difference between them and second place, it puts things in perspective.”

For the boys, Travis Carlson placed fifth with a time of 18:20.90. Other top 20 runners were Micah Flores at 14th, Andrew Pollite at 16th, Tucker McDaniel at 17th and Thailand Mitchell at 19th.

“Those boys had their best times of the season,” Atkinson said of top 20 performers. “Everyone of those teams put forth a great effort.”