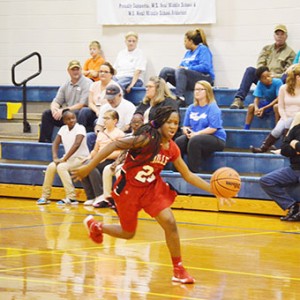 BMS’s Janazsia Nettles dribbles for a fast break point. Nettles had 19 points for the game.

In girls’ play, the Tigers defeated the Eagles 44-4.

The lone scorers for WSNMS were Jyra Odom and Alyssa Askew, with two points each.

With the win the BMS girls remain undefeated at 7-0.

In boys’ action, it was a close one, but Brewton emerged victorious 39-33 over the Eagles.

In the fourth quarter WSNMS would put pressure on BMS with a full court press. The press forced a couple turnovers down the stretch for BMS. WSNMS made a run, getting to within four points. The BMS lead dwindled, 37-33. The game came down to free throw making for BMS. BMS’s Daniel Samuel would knock both free throws down to make the game out of reach for WSNMS.