“We talked about it at halftime that we were missing too many easy layups,” said JDCC head coach Allen Gainer.

“We came out first three possessions of the second half and we missed layups,” he said. “Those three [layups] tie the score if we make them. We missed a lot of free throws and we gave (Stillman) a lot of second chance opportunities that led to points for them. We got to get better and we will. We just got to keep working.” 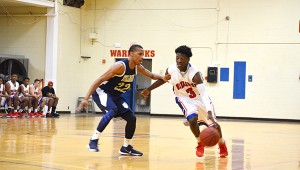 JDCC led for the majority of the game until 12:58 left to play in the second half, when a two-pointer gave Stillman its first lead of the game, 50-49.

After another bucket by Stillman, JDCC freshman point guard Sterling Hinton tied the game up with a three-pointer.  Hinton would give JDCC the lead back with 10:37 to play, after sinking two free throws.

Freshman Keonta Edwards made a shot in the paint to extend the Warhawks lead, 62-57. After a Stillman make, JDCC free throw and another Stillman bucket, the score was 63-61.

Stillman’s Darien Briscoe tied the game back up with a shot, 63-63. After a couple of missed free throws for JDCC which Stillman countered with made buckets and free throws, Stillman held a 73-66 lead with 4:10 left to play.

JDCC’s Frederick Seal’s made two free throws down the stretch to shrink the Stillman lead, 71-76.

Stillman was quick to answer on their next possession when guard Keon McKinney hit a step back shot just inside the arc to make the score 71-78.  JaDarius Wilson gave JDCC hope with a bucket to make the score 73-78 with 18.3 seconds left to play.

Neither team missed a free throw for the remainder of the game. Hinton was fouled on a three-point attempt and made all three free throws, bringing JDCC within four points. Stillman’s Tamarco McDuffie was fouled, making the last two points for Stillman .

Leading JDCC was Keonta Edwards with 20 points and Frederick Seals with 14 points and 8 rebounds.

The team is now 0-4. JDCC will be in action again tomorrow, Nov. 19, against Huntingdon College at 5 p.m.