Tigers too much for Pike County 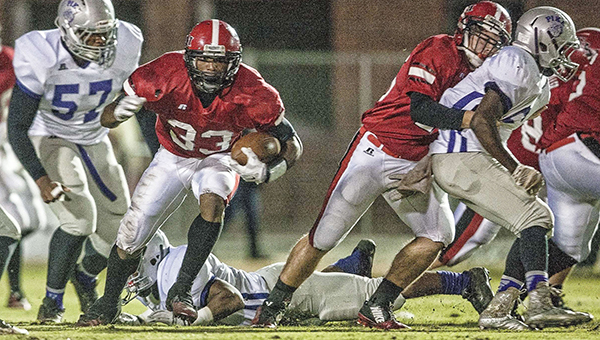 From the kickoff, to the final ticks off the clock to end the game, the T.R. Miller Tigers were in control against Pike County, winning in blowout fashion 49-8 to advance to the third round of the 3A state playoffs.

TRM head coach Jamie Riggs said the sizable lead early forced Pike County to get out of their comfort zone on offense and the Tiger defense did a good job with keeping the big play to a minimum.

“That was one of the keys to the game,” Riggs said. “We didn’t give them a lot of big plays. It helped when we were able to get the lead like we had. We made them play from behind. We were really concerned about their running backs. Their running backs are really good like Neal’s. The lead kind of got them out their running offense having to throw the ball a little bit more.”

After forcing Pike County to punt, TRM went to work quick from their own 32. Junior quarterback Caleb Winton completed three consecutive passes to three different receivers for yards good for 18, 12 and 17. Senior tailbacks Markail Mitchell and Ahmaud Taylor would finish the rest with Mitchell running for 14 yards and Taylor capping off the Tigers first drive with an 8-yard touchdown. Kicker Hunter Brittain added the extra point to give TRM the lead, 7-0.

Pike County would have a little more success with their second drive when senior tailback Deshon Cowling got outside the hashes for a 30-yard run. The run wasn’t enough for the Bulldogs to put points on the board. Forced to punt again, the Tigers began their second drive from their own 12. 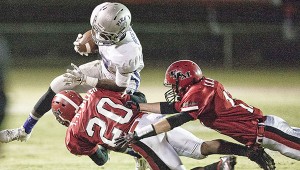 With 10:17 to go in the second quarter, TRM’s Taylor would run in a one-yard touchdown. Brittain added the extra point to extend the Tiger lead to 14-0. On the ensuing kickoff the Tigers caught the Bulldogs napping with an onside kick. The Tiger offense would score on the following drive with a 5-yard run by Taylor. With the added extra point the TRM lead grew, 21-0. With 5:11 to go in the second quarter Mitchell found a running lane good for a 62-yard touchdown. With the extra point successful, the Tiger lead was now 28-0.

On the Bulldogs next possession, the Tiger defense forced a turnover to give the ball right back to their offense. On the first play after the Pike County turnover, Winton found senior Chardian Johnson on a double move down the sideline for a 54-yard touchdown. TRM added the extra point to make the score 35-0. With 31 seconds left in the second, Mitchell rushed in for a one-yard touchdown for the Tigers. Brittain added another one of his seven extra points on the night to take the Tiger lead of 42-0 into halftime.

With 6:36 left in the third, Pike County was finally able to break the score column when senior Jerrell Lawson found senior Kamari Jackson for a leaping catch in the end zone. The score would stop six unanswered touchdowns by the Tigers. Pike County would go for two and succeed after Lawson found Cowling for a catch in the end zone to make the score 42-8.

The Tigers would put the exclamation point on the game with 45.3 sec left in the third when Taylor punched in a 5-yard run for his fourth touchdown of the night. The Tigers added the extra point to make the score, 49-8.

The Tiger defense only allowed six first downs the whole game, giving up 222 total yards of offense to Pike County. The Tigers forced two turnovers, on a fumble recovery and interception made by sophomore Michael Campbell.

This week TRM will host Hillcrest-Evergreen in the quarterfinals.

Earlier in the season, TRM defeated Hillcrest-Evergreen at home, 30-20. Kick off is at 7 p.m.